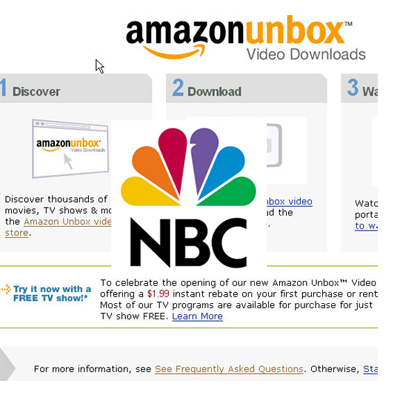 NBC and Amazon have reached a deal. Apple will be mighty angry. Maybe, I don’t know. NBC will sell its really great shoes—”Heroes” and “The Office” among them—on Amazon’s Unbox video download service sometime in the future, presumably soon after NBC’s deal runs out with Apple in December. Victory for you, the consumer?

The issue here was control. NBC wanted the freedom to charge customers more for newer content than older content; Apple wanted none of that. So NBC will sell its shows—junk, in my opinion—on Unbox. Unbox, if you’re one of the few who have never used the service (that’s irony; no one uses it), sells movies for $14.99, or you can rent them for $3.99.

TV shows will still be available the day after they air.

Yeah, so will this work with my Mac? Because if not, hell, I’ll just go back to BitTorrent. They won’t see a dime from me.*

*As if I’d ever buy a TV show. Not in a million years.