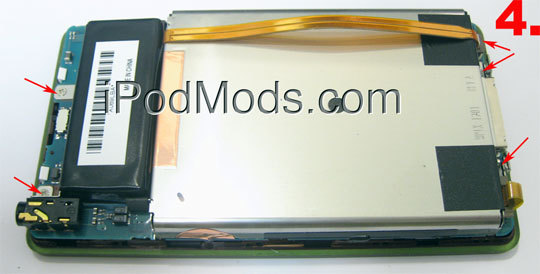 Thank you for watching us for your Mac coverage! More images and video coming soon. 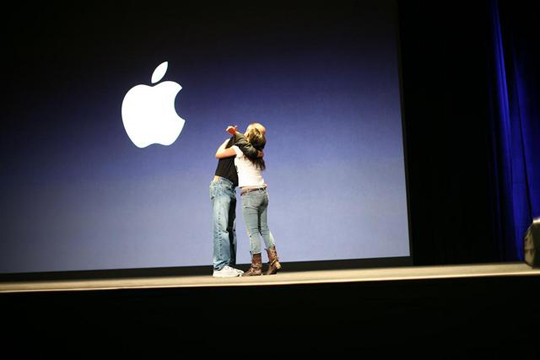 Is that an iPhone in your pocket or are you just happy to see me. 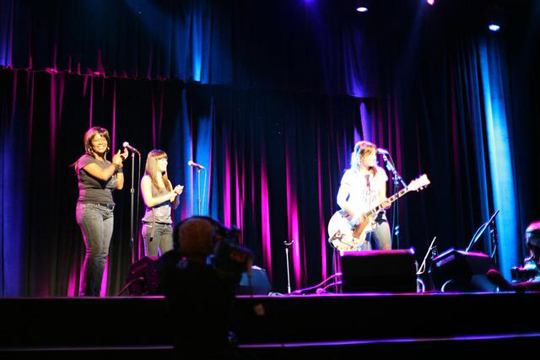 11:21 PDT She’s playing a second song. Steve likes it. Steve is coming back. Thank you for coming today. And we’re done. 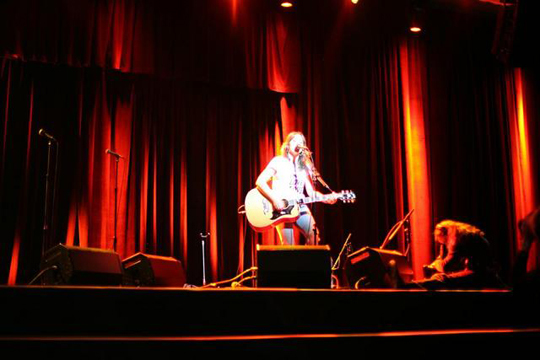 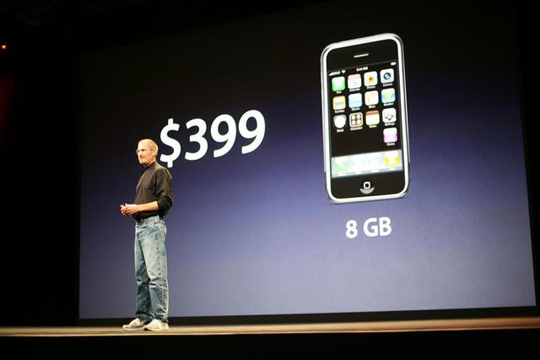 11:14 PDT Some musicians are here to perform for us. KT Tunstall. Steve: “shes very talented and very hot” playing now. 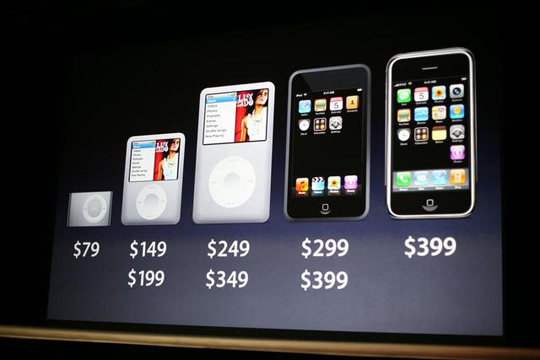 11:13 PDT people who worked on products standing up – lots of them – good for them! 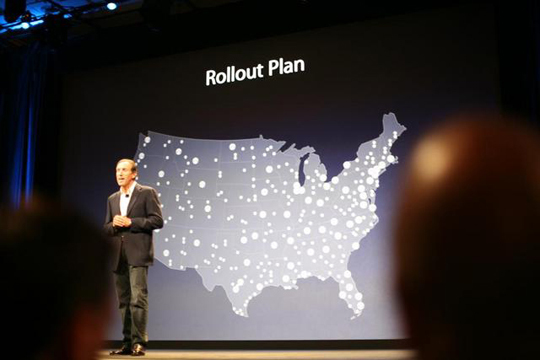 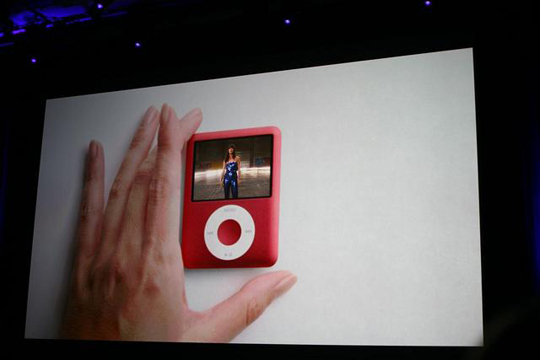 11:05 PDT 10 previous songs in starbucks can be displayed in tunes wifi music store. Exclusive starbucks deal with iTunes.
They can roll this out overnight… he’s showing a map. New York and Seattle will see it on October 2nd. 600 stores on the 2nd. Nov 7 San Fran Bay Area. Feb 08 in Los Angeles. Chicago in March. 25% of all stores by then. End of 2008 – Most metro areas covered and 2009 all the stores.
Took them years to make this deal… and apparently years to roll it out. 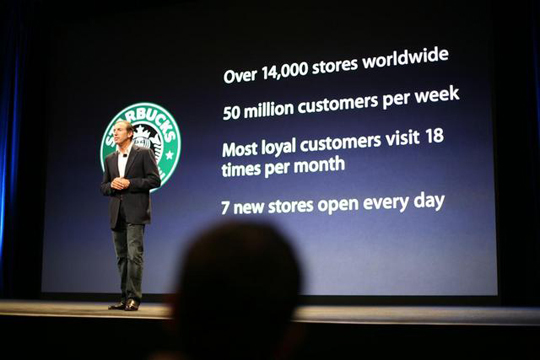 11:03 PDT Doug asks: “do you think you have to pay to get on Starbucks’ T-mobile hotspot thing in order to buy a song that’s playing in the store?” Nicholas sez: “I should hope not” Confirmed – it’s free. No hotspot requirements.
NOT free for general wi-fi.
No login required to buy the song they’re playing. 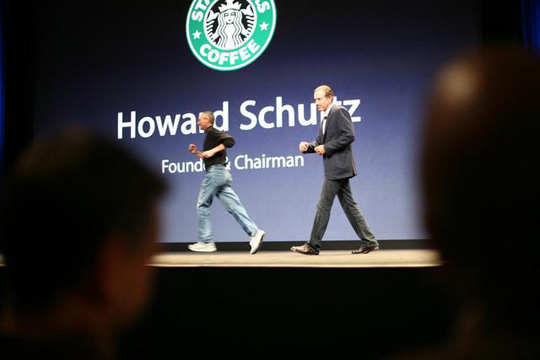 11:00 PDT“really excited about partnership with starbucks” welcoming Howard Schultz, founder and chairman of starbucks. he’s just talking about the company. First they were serious about coffee. Now they’re serious about music. [NEW IMAGES BELOW]
10:57 PDT Parnership with Starbucks. “in new itunes wifi store….when near starbucks with wifi, automatically you get 5th button” can pick up what song they are playing in store
It detects the song playing in starbucks and lets you buy it. Doug: “[head explodes]” 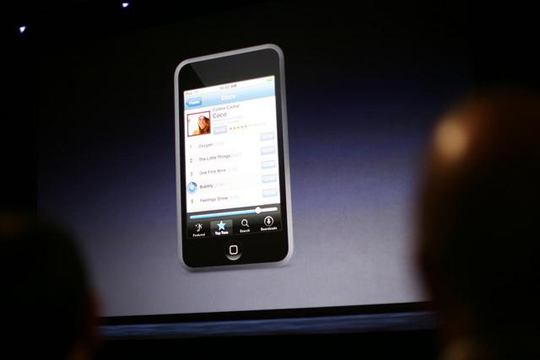 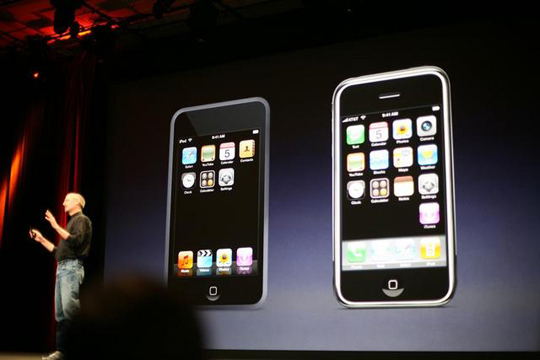 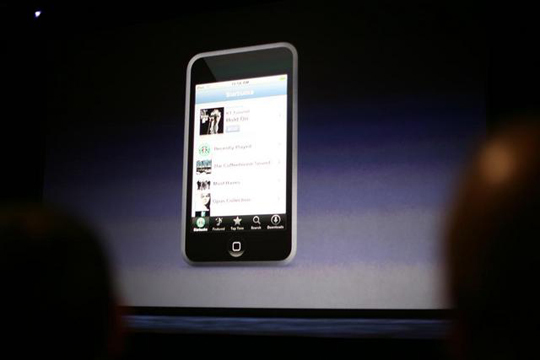 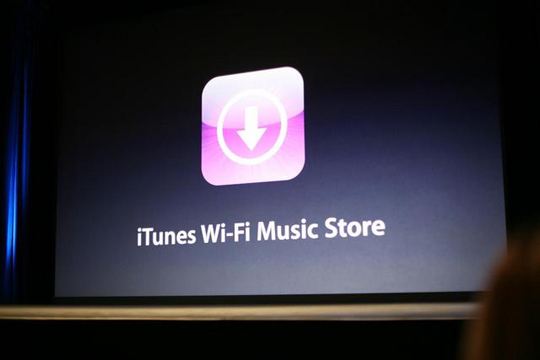 10:56 PDT Will be in iPhone later this month. One more thing – partnership with starbucks… 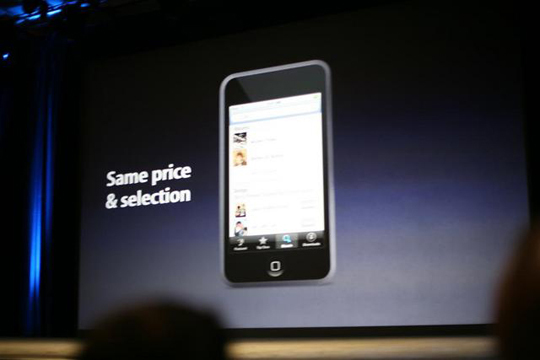 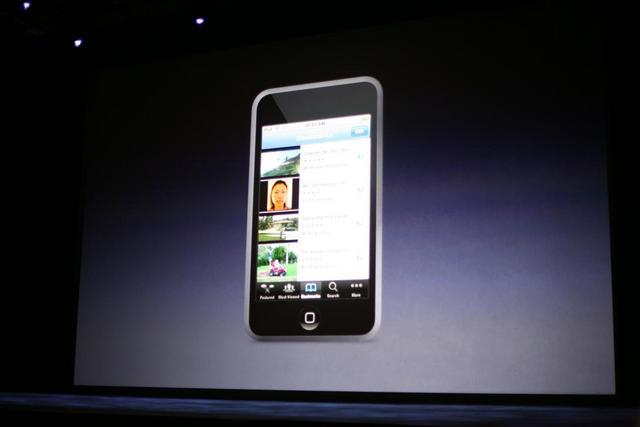 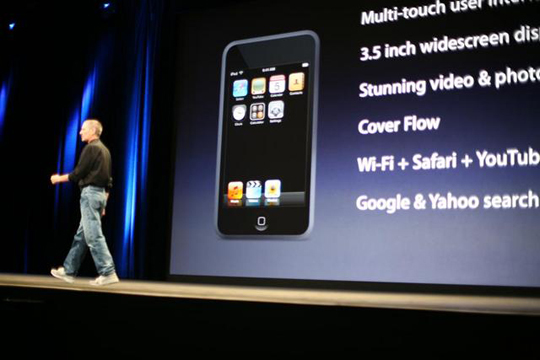 10:50 PDT New ipods available in a few weeks. Looks like they have the Leopard UI on there. Reflections on dock. Everyone is pissed about the “few week” wait. One more thing…looks like it’s iTunes WiFi Music Store. Oh snap! Free previews over WiFi. Download right to your iPod. You can sync songs you DL back to iTunes. Revolutionary stuff. 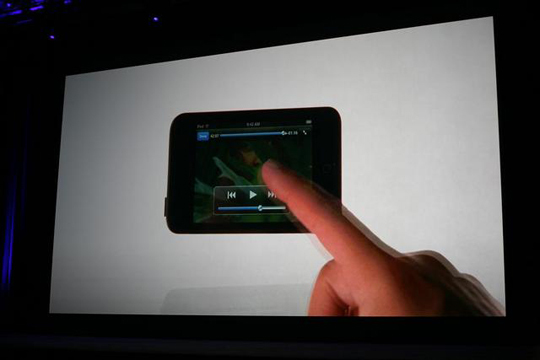 10:45 PDT Showing Facebook app on iPod Touch. Killer. John sez it’s like the Archos 605, only better.
Steve is done with WiFi and YouTube now. Worldwide product – standard connector. Nicholas live from NYU: “well if it’s worth anything, the kids in here just said ‘oh shit really’ when i said the new ipod is like an iphone without a phone” 22 hours audio playback, 5 hours video playback. 3.5 inch widescreen display. Multitouch, stunning video and photos, coverflow. All yours for….? Holy cow!!! 8GB for $299 and 16GB for $399. 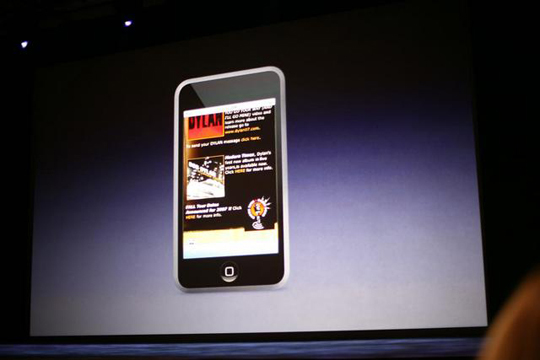 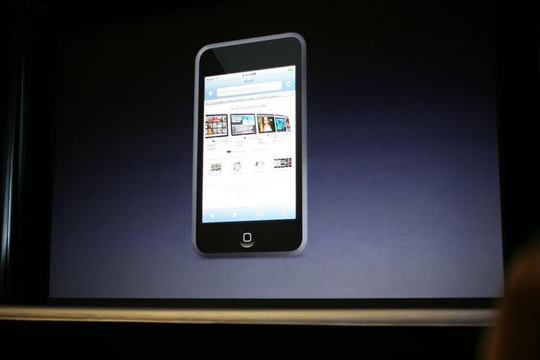 10:43 PDT nicholas: “all those dopes who bought an iphone just because of the ipod part must feel dumb now” I bet! Browser is washed out on screen. Looks bad. 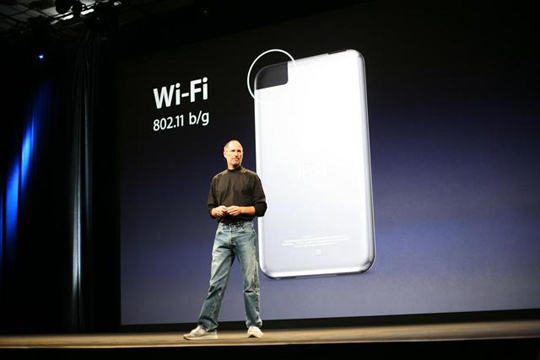 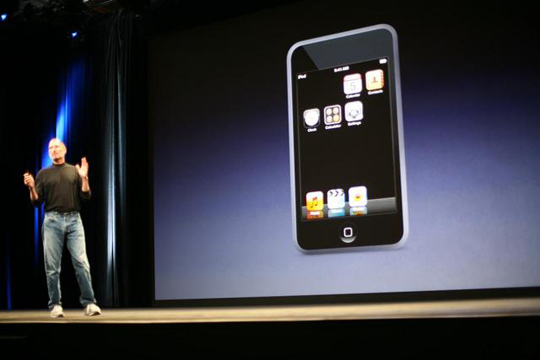 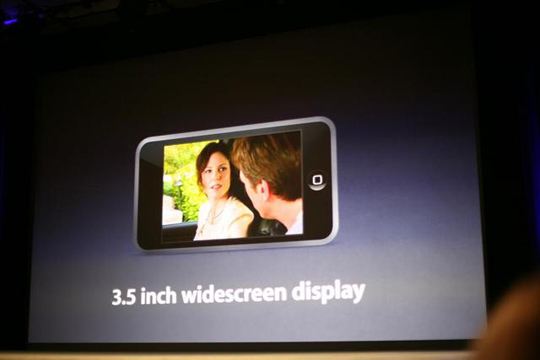 10:37 PDT
Steve is playing a Travolta flick. Showing off photos. 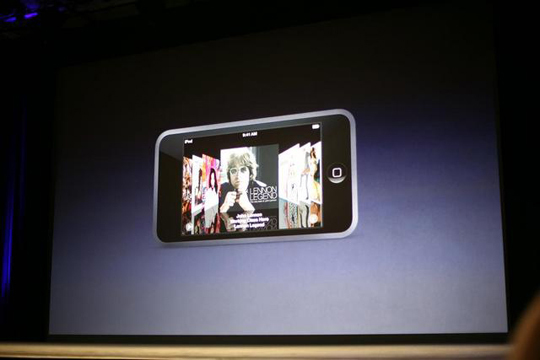 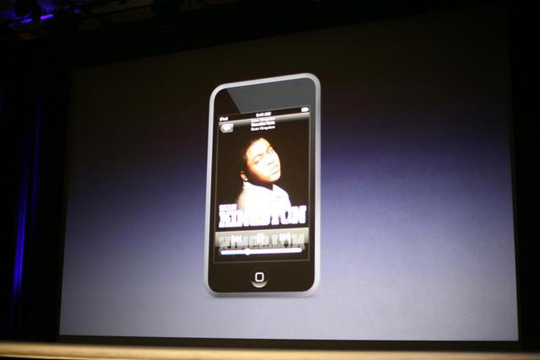 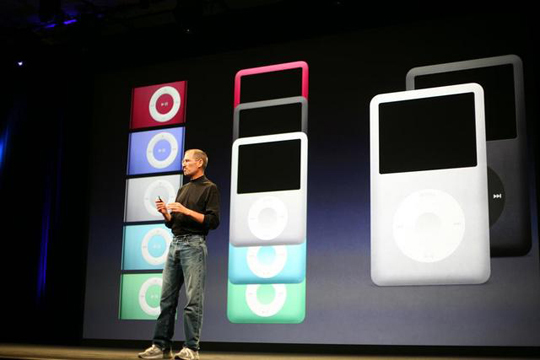 10:31 PDT iPhone Time. bringing the tech of the iphone to the iPod. iPod TOUCH! Has a
touchscreen. 8mm thin. 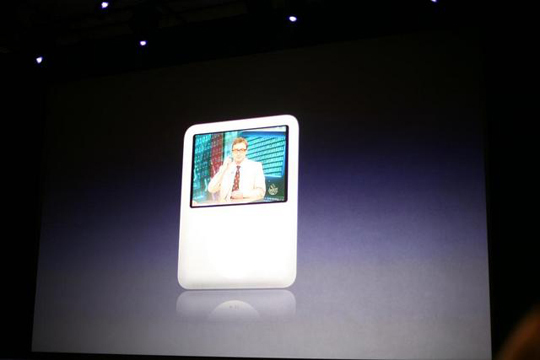 mark: “nothing much here… or is there”