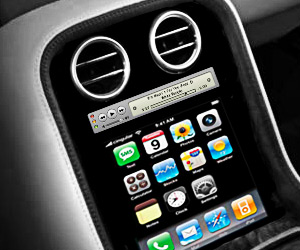 I’m not really sure how I feel about the impending rumored iCar, but chances are it’s real and it’s coming since reports are coming out that Jobs met with VW head honcho, Martin Winterkorn, last week. So what sorts of things should we expect/want from it? Laptop seems to be on the ball with their wishlist. Some of it sounds outrageous, but nothing that isn’t feasible. What does everyone else want?

Dashboard on the Dashboard
We can’t wait to slip into our silver, leather-interior car and control everything–from the air conditioning to the gears–via a strictly touch-sensitive dashboard that’s void of any buttons or control wheels. Our fingers will manipulate everything on the panel with simple finger strokes and taps. In keeping with Apple’s current Mac OS X Dashboard, we’re demanding customizable Widgets with everything from Google Maps to current gas prices.

Click Wheel As Steering Wheel
It’s going to take some getting used to, or even a retake of your driver’s test, but replacing the olden-day steering wheel with an iPod-like Click Wheel will make it easier to turn the corner; you’ll merely have to slide your hand over the touch-sensitive plastic wheel. Bonus: A simple push of the center button emits a loud honk that sounds like a Leopard purr.

GPS Powered by Google Earth and Maps
The flyovers look cool on a desktop, but Google Earth really belongs in the iCar’s cockpit. When paired with a high-sensitivity GPS receiver, you’ll get the most out of the highly detailed satellite views. And with the power of Google Maps under the hood, you’ll get all of Google’s local-search mashup goodness, free real-time traffic info, and the ability to route around incidents with the new “Drag ‘n drop” points feature. Oh, and Google Street View automatically engages when you enter complex intersections.

Lithium-Ion Batteries (Without the Meltdowns)
We’ve been waiting for a Volkswagen hybrid, and with the iPod’s long-lasting battery life, we can see why they’ve been holding out. Taking a page from the new Nissan Mixim concept, the iCar should be an electric vehicle powered by a compact lithium-ion battery. We just hope you won’t have to ship your car back to Cupertino to have it replaced.

Smart Playlists
Using live traffic updates, your music playlists will be automatically generated by the amount of congestion. When you’re about to enter areas with heavy traffic, you’ll be soothed by the mellowest tracks in your collection. When all that’s in front of you is open highway, the bounciest and raciest pop and punk tracks will move to the top of the list. Your iCar will even customize your library based on where you are. If you’re cruising down the Jersey Turnpike, for example, you’ll hear Lynyrd Skynyrd’s “That Smell” blaring through the Apple Hi-Fi sound system.

AirPort Antennas
Pull into the garage and you’ll be able to download iTunes movies over the air to the backseat monitors for the kids to watch, or sync videos, photos, and music with your Apple TV. We’re also excited about the possibility of swapping playlists with other iCar owners via Wi-Fi while you’re at a stoplight-provided they have DRM-free tracks.

Stereo Bluetooth
We know, we know. Stereo Bluetooth isn’t yet a feature on iPods or the iPhone-although that could change on September 5th. But the iCar will usher in a new way to sync your iTunes, contacts, and more with the Mac OS X-powered vehicle. Built-in speech recognition will let you make calls through your iPhone, as well as pull up specific tracks or artists.