Over the past year Facebook has been broadening its horizons, facing a bit of criticism each step of the way. First there was the newsfeed. Then there was the opening of the network to high schoolers and the general public. Largely the expansion has paid off for the Facebook, with the site’s growth rate hastening after each change. However, the changes have left some users wistful for a time when Facebook was a place just for college students.

College.com plans to serve those users. The site has all the basics of any other social networking system, but includes features specifically tailored for college students. They’ve just launched the site into public beta with over 30,000 students at Florida State University. To support the alumni network, they’ve also kept registration open to anyone, .edu address or not.

Like other networks, you can create a profile, make friends, write blog posts, hold events, join groups, and post videos. It’s all specific to what college you go to or of which you’re an alum. Similar to Facebook, your viewing privileges are linked what college network you joined with. However, they’re not tied to your email’s domain name. On top of the usual features, College.com has added some of their own. The more notable smaller features are dating compatibility tests, flash cards, news bulletin board, and a wake-up call feature that rings your phone at any time you choose.

The bigger difference comes with their school specific features. Like Facebook used to support, College.com lets you find and post your class schedule to your profile. To aid with college life, they’ve also included specialized profiles for professors and the Greek system. Professor profiles are listed in a school-specific directory, allowing you to read bios and rate them. The Greek system features profiles for Fraternities and Sororities on campus, with the ability to rush or list new organizations.

I can’t help but feel that a lot of this functionality may wind up returning to Facebook through the application platform. Not to mention the number of college specific Facebook competitors stacking up (ConnectU, CommonRoom) or that they need to keep alumni engaged post graduation in order to sustain any real growth. However, MyYearbook has gotten a lot of mileage out of targeting a social network that’s for and by high schoolers. College.com may do the same. 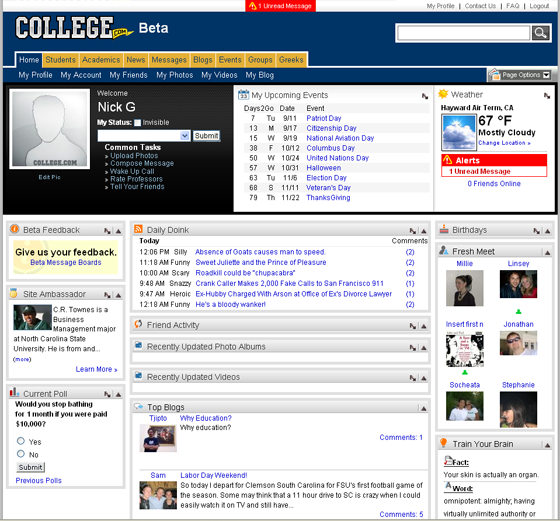