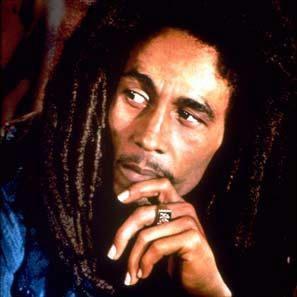 Bob Marley’s family is NOT happy about Verizon going over their heads to ink a deal with Universal Music Group to sell exclusive Marley ring tones. Verizon will also be able to use Marley’s image exclusively. According to the family, such use would constitute an endorsement which would and should allow them to set parameters on how Bob’s music and images could be used.

They won’t be able to control any of it if Universal and Verizon win this one. Universal is calling the family’s claims “meritless” and insists that it’s operating within the terms of a longstanding contract.

I was on an airplane a few days ago and read an article about how dead celebrities are used to sell products. One of the products was an energy drink called Liquid Experience, which uses the late Jimi Hendrix as its spokesperson. The first paragraph of the website reads…

“With impossible riffs, mystical lyrics, and outrageous amp-torturing innovations, Jimi shattered musical convention, while uniting the world in an electrified celebration of peace, love, and purpose. This new energy drink is a tribute to Jimi’s legacy, The Jimi Hendrix Experience and their everlasting influence on music and those who play and create it. So pop one open, turn up your favorite Hendrix tune and toast the legend whose genius still inspires people all around the world.”

A tribute to Jimi’s legacy. Uh huh. But wait, there’s more! From the original article…

With that kind of popularity, Glass thinks he can turn his brand, Liquid Experience, into a billion-dollar company. “We don’t need to advertise on a regional or local basis because of the power of the Jimi brand,” he says.

But isn’t this just a profit-generating gimmick? Well, yes—but also a little more, according to the people behind Beverage Concepts. “Without Jimi we wouldn’t have all this,” says creative director Kelly Kalichman.

To assuage accusations of greed and fulfill their own sense of philanthropic duty, Glass and Kalichman have pledged 10% of the profits to MusiCares, an organization that helps struggling musicians. “Without that we don’t have a shot with the consumer, and we don’t have a shot of doing what we want to do,” Glass says.

As long as it works, there will always be a market for anything that has to do with a dead celebrity. “The entrepreneurs of the world sit around like vultures looking to grab a piece of the pie,” Kalichman adds.

Please draw your own conclusions but to me, that sounds like “Jimi’s gonna make us rich, like billions rich. We have to make sure to give 10% of our profits to some charity in order to trick Hendrix fans into accepting the ‘Jimi brand’. My creative director Kelly will now tell you that entrepreneurs are vultures. We’re not vultures, though. Kelly, tell them that without Jimi we wouldn’t have all this. That’ll make it seem like you’re a fan of his.”

At the end of the day, though, someone from the Hendrix estate sold the rights to this company. So be it. The difference between this situation and the Marley situation is that the Marley camp doesn’t want Verizon to have exclusive access to Bob’s music and images without being able to make sure his legacy isn’t turned into something ridiculous.