PeekYou is a fairly new site that competes in a growingly crowded people search space.

PeekYou was founded by Michael Hussey, the creator of sites including RateMyTeachers.com which were later acquired to MTV. Hussey sees PeekYou as being “the ultimate reindexing of the web and a virtual people pages, spanning the entire web and assigning unique identities to individuals made up of everything from Social Networking pages, blog posts, news stories and known online aliases.” OK, so that is a handful, but he is at least aiming high. The site launched in July 2007.

PeekYou competes directly with Spock and in some respect with Wink as well (see our Spock coverage here, others here), so a direct comparison is called for. I like PeekYou in some ways more than Spock. It could be the aesthetics: PeekYou is much nicer to look at and seems to play more nicely as well in terms of editing, where as Spock may provide better links due to its higher user numbers, but it just doesn’t look nearly as nice. The data in PeekYou, at least for the couple of people I checked, also seems to be more accessible (for now). For example, comparing Michael Arrington on PeekYou and Spock (here and here) you get an immediate idea on what Michael is about in PeekYou, where as in Spock there may be more tags and relationships, but they are partially buried and not always immediately clear in terms of context. All up, Spock may be getting all the attention, but PeekYou does offer a decent alternative. 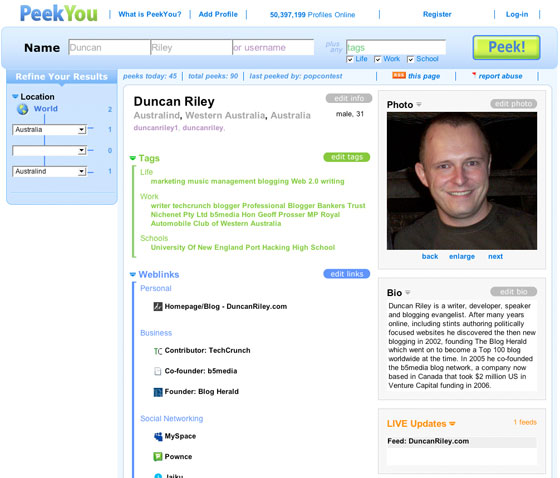