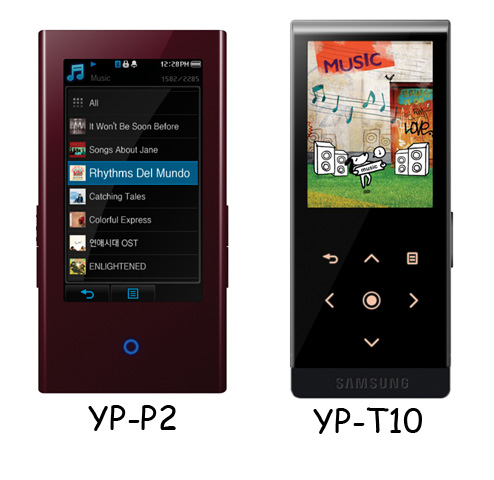 The Yepp YP-P2 will have a 3-inch touchscreen LCD (480 x 272) that supports gestures but not multitouch) and 4 or 8GB of flash memory, and it’ll come in three classy colors: black, burgundy, or white. It’ll support up to 3 simultaneous Bluetooth headsets, so you can crowd around the tiny screen with a couple friends. You can watch MPEG-4 and WMV9 videos, but sadly you won’t be getting content from online video services like CinemaNow. It’s less than half an inch thick, and the battery will supposedly last 35 hours for audio and 5 hours for video (presumably without Bluetooth on).

The Yepp YP-T10 is a 4GB flash-based music player with a 2-inch screen, but whoa — Midnight Black, Mystic Purple, and White Cloud? (Did they really mean to name one of the colors after a toilet paper brand?) It can handle up to two Bluetooth headsets, so you and a buddy can look like total dorks together while listening to the same ABBA tune.

In November, Samsung will issue a firmware upgrade that will enable some pretty cool cell phone connectivity — you’ll be able to use either device as a surrogate handset! Pricing hasn’t been set for either player, but they’ll both drop in late September.