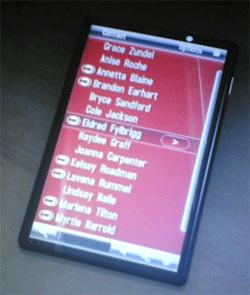 The pace of rumors and leaks around the fabled Google Phone is picking up, suggesting that Google is making a real push to launch something early next year and is no longer trying to keep everyone quiet.

Yesterday CrunchGear got confirmation from a senior (and anonymous) HTC exec that they’ve created some twenty devices for Google to test and are shooting for a Q1 2008 launch.

The two rumors fit together nicely. Engadget says Google is likely shopping its OS to handset makers. HTC would certainly be one of the manufacturers that they would be talking to. And the huge success of the iPhone may have spurred Google to kick things into high gear. That would involve adding a lot of new people to the team, and the leaks we’re starting to see are the predictable result.

Google’s effort is different than the iPhone. They look to be focused mostly on the OS and layering Google applications like Maps and Gmail on top of that, while simultaneously talking to device manufacturers about a number of devices. Apple, instead, took a much more holistic approach in creating the iPhone. Google’s product likely won’t appeal to the mainstream audience that the iPhone attracts…but it probably won’t have a $500 price tag, either.

And just to throw another tidbit out there – the HTC exec that was mentioned on CrunchGear yesterday said Yahoo is on a parallel track as Google, and has actually been working on custom phones for longer than Google. We may be seeing a Yahoo phone next year, too.