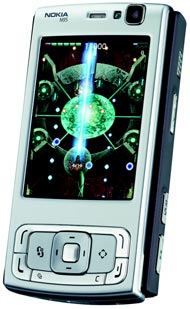 Boy oh boy did the N-Gage suck. (Sidetalking, anyone?) But Nokia is bringing it back this week, much to the excitement of… um, anyone? Yeah, is anyone excited that N-Gage is coming back?

It’s different this time, though.

N-Gage won’t be a crappy phone with crappy games. (I’m pretty sure snow globes had more advanced graphics than N-Gage games.) No, N-Gage is being reborn as a gaming service, with the backing of several big players, including Electronic Arts, hoping to cash in on the growing mobile video game market. I’m sure I’m not the only one who played several hours of Lumines during class or meetings.

When N-Gage launches this week, it’ll only be compatible with a couple of Series 60 cellphones. Of course, as the weeks turn into months, Nokia will release more and more cellphones that work with the service.

How else will N-Gage be different, you ask? Apparently Nokia went to a top design firm and worked with it in order to ensure that the service is as user-friednly as possible. You’ll find shortcuts to features and settings that normally would have been buried somewhere in the menu structure. When playing online, Nokia has a matching service lined up so that you end up playing against people you know or people who are comparable in terms skill. Sounds like Nokia has been studying what makes Xbox Live so popular.

As you might expect, the games will err toward the casual genres—puzzle games, sports, etc. No Dragon Quest: Handheld Edition for us, I suppose.

From my often-wrong vantage point, it appears that Nokia learned its lesson with the first editions of the N-Gage. Not only is it now scrapping the whole dedicated gaming phone thing—if I want a dedicated portable gaming device, I’ll whip out my DS—but it’s cleaning up the user’s gaming experience. If we get a chance to play with the service, we’ll be right here with the thumbs down or thumbs up.