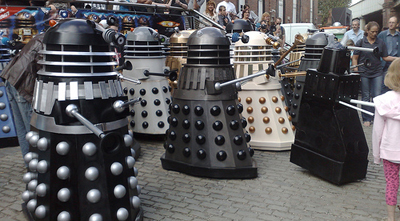 If you remember the original Doctor Who, or have been catching the new series on the Sci-Fi Channel in America then you probably know that a group of Daleks together is never a good thing. Unless of course it is part of exhibition honoring the long-running British sci-fi series, in which case the more Daleks the better. Yesterday the Museum of Science and Industry in Manchester brought together 67 home-made versions of the Doctor’s most troublesome foe. Original Dalek costumer designer Raymond Cusick was on hand to judge the entries.

And despite other posts online that Cusick was the original creator of the Daleks, CrunchGear will set the record straight: the late Terry Nation is the writer who came up with the Daleks, which Cusick brought to life in costume form. Additionally, Daleks are not robots; rather the robotic looking casing is the life-support and combat armor for a race heavily mutated in a nuclear war on a distant planet. Do we know our British sci-fi or what?