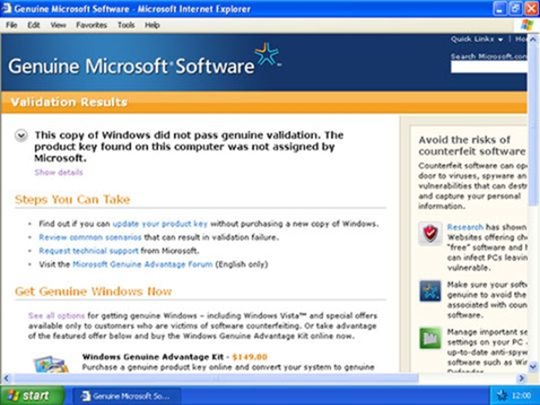 Wuh oh. According to everyone, everywhere Microsoft’s Windows Genuine Advantage server is down for the count. Both 32- and 64-bit versions of XP and Vista are affected and allegedly some Microsoft support personnel are telling irate consumers that the server could be down until Tuesday.

Okay, so don’t update anything for a couple days right? Yes, but if you do download updates or even add new hardware to your machine and you fail the WGA check, definitely don’t reboot your machine because you’ll apparently lose Aero functionality.

Oddly enough, I unknowingly updated my machine last night and restarted it but nothing bad happened. Since these reports started coming in last night, I must have just missed the server going down. Whew.

Any CG readers having any problems?