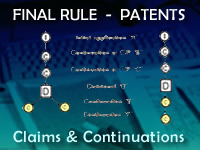 While Congress takes a break for August on The Patent Reform Act, two competitors are stealing some of the thunder: the USPTO and the US Circuit of Appeals for the Federal Circuit (CAFC).

Heads are spinning to keep abreast of the broad, rapid-fire changes that are being dealt to the patent universe. Namely, just this week, the CAFC reversed its view on willful infringement damages in a case with Seagate, and the PTO held a webinar to cover its Nov 1st new requirements to Improve Patent Quality.

An overview with links, and some commentary on the continued shift after the jump

Seagate CAFC Ruling Changes 3x Damages
With its ruling, the CAFC has raised the bar for enhanced damages to “objectively reckless” behavior from negligence. In essence, proof that the infringer acted deliberately in its efforts to infringe will cause 3x damages, while negligence and unknown infringements now have equal weight of 1x damages. The ruling also noted that lengthy and expensive clearance opinions of non-infringement were not necessary to avoid 3x damages putting more burden of proof on the enforcing company.

Looking Forward – While enhanced damages are rare, this move by the CAFC reduces the payoff potential of patent litigation, thus reducing incentive for patent owners to go after broad litigation suits where costs are close to potential fees.

USPTO Patent Quality Improvements
Many IP attorneys had rumored that the PTO was about to enact changes unto itself to lessen the load on its examiners, remove some loopholes in the system, and add clarity to filings.

Examination Support – Patents filed after Nov 1st will be allowed only 5 independent claims and 25 total claims without requiring added examination support, specific filing support will be required for applications with more than this number of claims.

Continuation Limits – A common means to extend the life of a patent is to file a continuation with new claims on the invention which can be better tuned to the market’s adoption of the technology and a new, later date of filing and expiration. The PTO now requires details for how applicants must file continuances providing why claims weren’t filed with the original patent.

Looking Forward – The impact of the 129 page document and related webinar hasn’t been fully digested, but the anticipated narrowing of guard rails means that “submarine patents” that can extend the life of an invention’s protection for years as well as patents with 100+ claims covering a high volume of iterations on an invention are being carved out of the system.

These modifications in combination fit into the theme that the PTO is forcing inventors to document a clearer path for examiners in the filing process in an attempt to clean up the heavy volume of patents being ramped in.

In one day, a suit was filed by an inventor against the PTO claiming irreparable harm as a result of the changes. Whew.

Oh, if that wasn’t enough, the PTO fees are going up. :P

Wrap
Patent owners and inventors have a very different environment to operate in. Lawyers and experts are still sorting out the changes, so be aware that IP based strategies are about to be impacted by these changes along with Obviousness/KSR and Injunctions/eBay. While the Patent Reform Act of 2007 may or may not happen, we will be able to look at 2007 as a landmark year for patent reform without a Congressional bill.