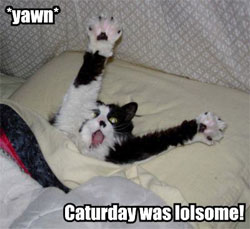 Mark Cuban wrote Friday that he believes the internet to be “dead and boring.”

“Some of you may not want to admit it, but that’s exactly what the net has become. A utility. It has stopped evolving. Your Internet experience today is not much different than it was 5 years ago….Web 2.0 is proof that the Internet has stopped evolving and stabilized as a platform. Its very very difficult to develop applications on a platform that is ever changing. Things stop working in that environment. Internet 1.0 wasn’t the most stable development environment. Todays Internet is stable specifically because its now boring.(easy to avoid browser and script differences excluded)”

He goes on to state that “The days of the Internet creating explosively exciting ideas are dead. They are dead until bandwidth throughput to the home reaches far higher numbers than the vast majority of broadband users get today.”

On a weekend where a Wall Street Journal article explaining the LOLcats phenomena is a leading story on Techmeme, there could certainly be some argument in favor of the notion that all that is old is new again, and that the web has become at least a little boring. Ultimately you can judge. Read Mark Cubans full post here, and let us know what you think in the poll below.

Is The Internet Dead and Boring?

(image credit: I Can Has Cheezburger)