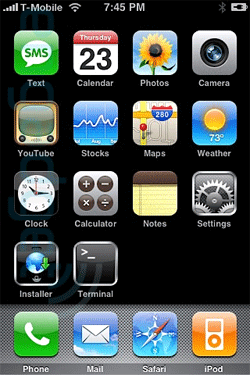 For those who might have missed it: Engadget has the scoop on a new software solution that unlocks Apple’s iPhone, allowing it to be used on any mobile carrier worldwide (presuming of course they run a 2G GSM network).

The creators of the iPhone hack (iPhoneSimFree.com) claim that the hack is “restore and upgrade resistant”; essentially reseting the phone and/ or loading the latest software updates doesn’t affect the hack. The big question is whether it will be resistant to future updates.

So will Apple try to block the hack, or will the Apple engineers in Cupertino be secretly cheering that their gift to mobile users can now be used worldwide and just simply leave the hack alone?

It is unlikely that the decision will be Apple’s alone. AT&T will be very unimpressed at the notion that users could buy an iPhone and bypass their network. The iPhone has already proved itself as being a massive confidence boost for what is considered by some to be America’s worst mobile carrier. The tangible benefits of a AT&T exclusive iPhone are also strong: roughly 1 million users are locked in to AT&T plans averaging somewhere between approx. $50-$100 per month per user, a benefit in the hundred of millions of dollars over the life of the contract. AT&T would be hoping for millions of additional users in the future as well.

On the other hand, someone, somewhere in Apple must be at least a little bit excited by the notion that more people than ever will now consider buying the iPhone. As much as Apple receives some financial benefit from AT&T in terms of a signup or ongoing payment, the real money for Apple is in the hardware and the Apple services such as iTunes, services iPhone users do and will use.

Either way, as long as the iPhone hack works America’s balance of payments should see a very small improvement in the coming months, as first adopters, and tech fiends world wide take iPhones home with them from their next trips to the United States.