Remember SpiralFrog that free music download service that announced itself nearly a year ago? Well, after slowly releasing invites to Canadians, we received a private beta invitation.

SpiralFrog originally made a splash when they sealed a deal with Universal BMG to give away free downloads of some of their songs in exchange for a share of on-site ad revenue. Later they closed a deal with EMI and have since added a bunch of smaller labels totaling over 700,000 songs. However, now we know a little more about how their free system works. 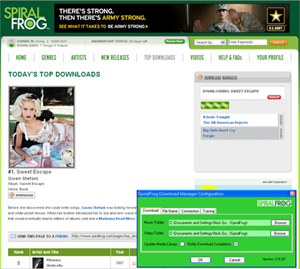 Songs on SpiralFrog are not ad-supported through interstitial advertising or free in the sense that you can bring them anywhere. Instead, you get DRMed songs (WMA) leased to you for a free 30 day membership (or you can buy on Amazon). You can renew your membership, and the lease to play your songs, by answering survey questions (# concerts per year, how you discover music, etc). All that data helps SpiralFrog know what kind of ads to serve on the site.

To keep the whole system secure, they’ve locked down the download process end to end DRM controls. First you have to get a download manager, and then ensure you have Windows Media Player 9.0 or up. The system is kind of annoying and only works on Windows machines since it uses Microsoft DRM. Although, Microsoft DRM has already been cracked. The DRM requirement also means the songs only play through Windows Media Player, making them unportable. Unlike other DRM setups, though, there doesn’t appear to be a limit to the number of computers you can download to as long as you set SpiralFrog up on them.

Once the system is in place, you can search for artists and download their songs/videos individually. The songs are queued in a download manager and stored locally by artist and album in your SpiralFrog folder. The system seems to have intentionally been crippled so you view more advertising, with downloads happening one at a time and only while on the site. Using the site, I was able to download a bunch of songs and play them with no problem, but other early beta user have had trouble.

I don’t know if SpiralFrog will be able to sustain their business off of on-site advertising and affiliate music sales. A lot of other services are simply going DRM free, not download free. Blogmusik also recently went legit in France, but the US courts and music industry are a lot harder to sway. However, limiting the lease time on the songs means they can continuously tweak what hoops their users need to hop through to keep playing the music they download. For now it may be a simple option if you want a (legal) source of free tunes.