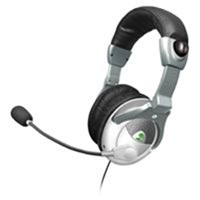 The Ear Force X3 headphones from Turtle Beach are designed for the Xbox 360. They plug directly into the controller and communicate via an IR receiver.

The main selling point of these “cans” (as I used to call them back in my college radio days) is a dynamic audio leveling feature which basically keeps your teammates’ voices coming through loud and clear even as explosions and gunfire increase in intensity around you. The microphone also uses a built-in monitor so that when you relay messages back, you’ll hear your own voice as well without having to yell.

According to Turtle Beach, “This lets you easily sense what you’re saying, but not so much that it’s distracting. Mic monitoring not only helps you stop talking so loud, it also eliminates that annoying ‘clogged ears’ feeling when talking while headphones are covering your ears.”

The headphones are PC compatible as well, although the mic part won’t work. Available to pre-order now for shipping on September 5th for $99.95.