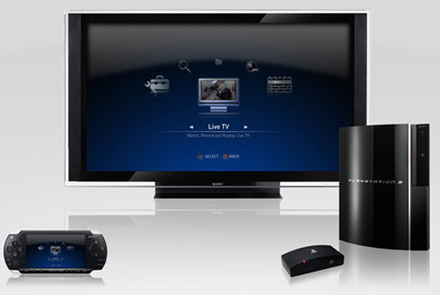 Apparently Sony favors PAL countries more than us. Sony officially announced today the PlayTV, which is a combination TV tuner and PVR. The UK, France, Italy, Germany and Spain will get first dibs early next year with the rest of the PAL territories getting in on the fun before we, NTSC, do. The details first announced weeks ago still hold true as PlayTV will run on DVB-T and will use a 7-day electronic program guide for PVR functions. The two TV tuners allow PS3 owners to view, record and play back 1080p content. You can control everything with your SIXAXIS or BD controller. As if this weren’t cool enough already, PlayTV will automatically pick standard definition or HD depending on your TV. You can also transfer recorded content to your PSP and Remote Play allows you to program and view PlayTV content while you’re on the go. Damn, that’s cool.