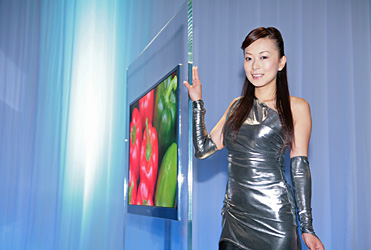 Unveiled earlier today in Japan was the world’s thinnest and lightest LCD TV from Sharp. That’s all well and good, but the prototype 20mm thick 52-inch LCD won’t go into production until 2010. The specs are rather impressive, though. The prototype boasts a contrast ratio of 100,000 to 1 and weighs just over 55-pounds. Me thinks I’ll be waiting for those fancy OLED TVs instead.