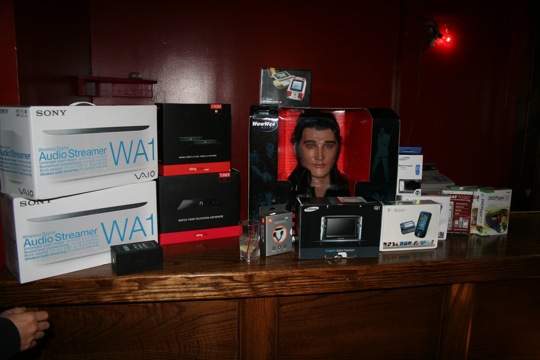 Manhattan’s Red Sky last night played host to a gathering of geeks and geek sympathizers the likes to which the world has never seen (at least not this week, granted it was only a Monday night — but that’s neither here nor there really. You get the point.) Anyway, the occasion? The CrunchGear One Year Anniversary Celebration, of course. What else could have drawn such an odd amalgamation of minds? I actually don’t have an answer to that question and I’m not sure that one even exists.

The group featured people from across the board, from fellow journalists to entrepreneurs to venture capitalists and beyond. We met readers we never knew we had (read: females) and marveled more than once at the momentum our humble little project has gathered — an achievement sometimes overlooked when gazing over the slow, incremental growth shown by our analytics team.

By 9pm we had distributed the majority of our drink tickets, mostly to Josh Goldman, and collected over 100 business cards, mostly from Joost and Joe Gallo from Ketchum PR. After experiencing some technical difficulties we were able to conduct our massive prize giveaway. And in the end, and to the best of my knowledge, everyone walked away properly schnockered and effectively enthused.