Although “advertising as entertainment” site Didja.com is not launching until next year, the NYT has a sneak peak at what it will look like (screen shot below). The NBC Universal project is part of the yet unnamed News Corp/NBC Universal cooperative strategy against Youtube. However, New Co.’s second “major assult” on YouTube looks like more of the same, a clone of TBS’s VeryFunnyAds. It’s very similar to the TBS re-branding effort, letting users watch heaps of ads by search, ratings, and sort by various companies and countries. 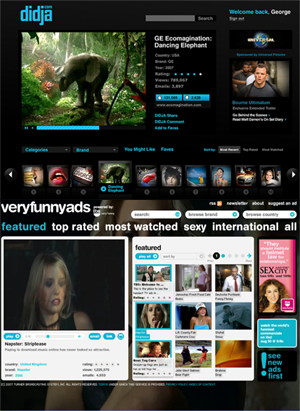 That’d all make sense if New Co. was copying a successful site, but VeryFunnyAds doesn’t appear to be a resounding winner despite the 63 million clip views the site article says they delivered over the past year. That number of views suggests an average of 5 million videos streamed each month, but the viewership of the site doesn’t stack up.

After an initial bump on launch, VeryFunnyAds’ traffic has since tapered out at about 100,000 uniques per month, according to Comscore. Sixty-three million streams is a lot of traffic for an audience that size, especially since they don’t allow off-site video embeds. Heavy.com, whose network generated about 6 million streams in April has about 5.2 million uniques per month. If the numbers are true, it appears TBS’s site is at most attracting a small cadre of ad fanatics.

Contrary to the “advertainment” meme going around, it doesn’t look like it has legs.