Movable Type is releasing the final version of their 4.0 platform tonight. We covered the beta, their turn towards open source, and new feature set previously. The new release, no doubt, comes under pressure from the success WordPress has had as an open source platform. Unfortunately, we’ll still have to wait until later in the year for Movable Types’ open sourced version.

The finalized version includes 50 new features, a component based architecture, a new plugin directory, and some new launch partners. It looks like a solid release that comes with a lot of the functionality WordPress MU is aiming for. Notably, Boing Boing will be upgrading soon. 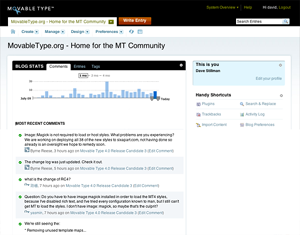 We covered the upgraded features in depth before. They included a new installation and upgrade wizard, easier and more powerful template management tools that speed site development, all new default templates and themes, and a completely redesigned user interface focused on streamlining common tasks. You can see a full list here.

However, the release also includes a shift to a component based architecture running on top of a single MT 4 code base. Components will be paid extensions of the platform meant to provide greater functionality out of the box. The first example component will be their enterprise version. Instead running as a separate installation, the enterprise version of the software will run on top of the basic MT 4 code base. It will feature the original enterprise feature set, including LDAP and Oracle support.

They have also released a new community component that beefs up the basic community features. The component adds a ratings system and deeper user profiles. The ratings system consists of post specific user ratings and a buzz feature that tracks the highest rated content. The new profile pages consist of a blog, their latest comments, and recommendations on your site. The infrastructure for these enhancements exist in the basic version, but buying the community component provides them out of the box and comes with support. They plan on releasing more components in the future.