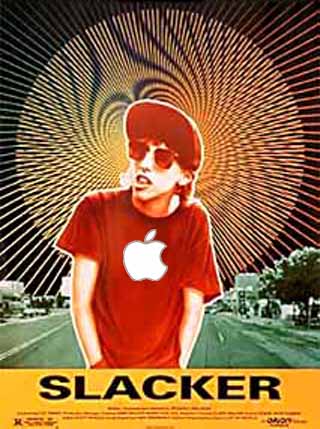 Radio gives you two important things: It keeps you from getting in a musical rut, and you don’t have to make any decisions about what to listen to next. Now that customizable Internet radio services like Last.fm and Slacker are all the rage, the time has never been better for Apple to let iPod users get a piece of the action. I smell an iPod + Slacker partnership now that Apple got GooTube to hop on the iPhone train….

It took me years to realize that maybe it’s not such a bad thing for people to listen to music without owning it, and it was my renewed interest in radio — both FM and Internet — that did it. Now I’m constantly checking out stuff at all these online spots and it’s definitely broadening my horizons. (Newsflash: Jazz Nerd Now Checks Out Indy Rock Bands!)

Remember radio? You don’t own the music, but you hear it for nothing and then you go and buy it if it rings your bell. Well Internet radio is alive and kicking, and it’s starting to play nice with portable players: Look at the happy marriages of SanDisk and Rhapsody, iRiver and Rhapsody, SanDisk and Yahoo, Sonos and Rhapsody, and so on.

For the iPod, though, it’s been lonely at the top. Apple is still holding out on the whole subscription service idea (a la Napster, Rhapsody, and Yahoo), preventing 80 percent of music player owners from getting new music regularly without having to do a term paper’s worth of research. Sure you can get an iPod Shuffle and constantly update the music on it automatically with random tracks from your own library.

There are other online sources of iPod-compatible digital music besides iTunes. But aside from eMusic, which has always done well with the iPod set thanks to its DRM-less MP3s), it’s tough to say how many iPod owners actually use them.

Slacker
One of the better things to come along in the Net radio universe is a Web radio service called Slacker, and the company is about to drop the Holy Grail of dedicated portable music devices. Prototypes are floating around out there, and they look frigging awesome: WiFi, 4-inch screen, I’m all for competition, but it would really kick ass if Apple got in on this early, because I’m starting to get sick of scrolling through my 80GB iPod to find something I haven’t listened to in a while.

Lala
This online CD shop lets you buy discs from other users for a fee. But you can upload your own iTunes library to Lala’s servers, whether your music was ripped or downloaded (as long as there’s no DRM). That means you can access your tunes from any Internet-connected computer, and even copy it directly to your iPod.

For about a month, Lala users were able to stream full-length tracks on-demand from one major label (Warner Music Group) for free — which was huge. But that service went dark; the company cited server overload, which I’m sure is true, but I suspect its immediate success (despite the unstable interface) may have scared some labels into backing out.

Other Freebies
There are always a few free offerings on iTunes and some free music download sites out there, though usually none of them has anything you’ve ever heard of. And then there’s SpiralFrog, a ballsy new ad-supported free download service with 700,000 tracks from the Universal record label (which is making headlines of its own). Of course, those tracks are in WMA format, so the iPod will once again be cut out of a free musical extravaganza.

DIY
While it would be great if there were a subscription service on iTunes, you can still “time-shift” Internet radio with recording programs like WireTap, which simply grab any sound your computer plays. If you’re really determined, you can even use an external sound card like M-Audio Transit USB and line the output back into the input and record analog. (People still tape stuff off the radio with tape recorders, and plenty of MP3 players have FM recording features.)

If the next significant generation of the iPod (not just a capacity bump or internal changes) turns out to have WiFi built in, which is still in question, Slacker would be the ideal partner for Apple to take over the digital airwaves and take iPod owners out of their boxes. Imagine being able to refresh your iPod wirelessly with music tailored to your tastes — though I’m certain “free” doesn’t fit into Apple’s vision.