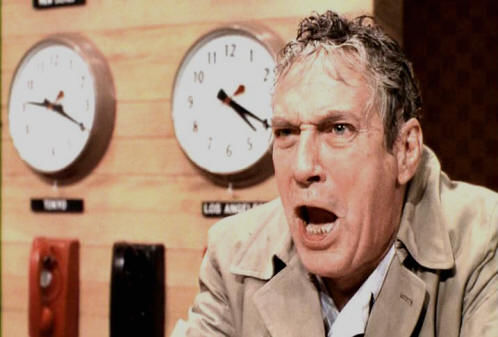 It’s very rare for us tech journalists/drunks to get a chance to let you, the reading public, get a glance behind the curtain to see the surfeit of riches we feast upon nightly. Case in point: every year, at all the big shows (CES, CTIA, all the huge shows where that tech folks love) two companies, Pepcom and Showstoppers, hold little sideshows where some of the exhibitors come to interact directly with the press. See, when press wander the floor, they’re usually cranky and angry. So in order to get even a minute’s face time, companies will rent a table at these little shows and get a chance to talk to us hacks amidst a smörgåsbord of shrimp, booze, and crazy beads that they make us wear.

The industry works like this: there are two big-name tech journos in the world, David “But Papa, I Want to SING!” Pogue and Walt “8-Track” Mossberg. I believe that companies like Sony send guys are given pygmy children festooned with diamonds every Christmas and they basically get to say who and what they want to see. About 99% of a company’s marketing budget goes to getting those guys to lay hands upon the latest products. The other 1% goes to us, the “working press.” The more of us they hit, the better it looks on a PR report. PR folks want to talk to us face-to-face, show us a few things, and release us back into the wild. They would kill to be able to sit down with us and drink some beers simply because it gives them a chance to slip us roofies and force us to review their products favorably. I’m not saying it’s fair, but it happens.

Anyway, the folks at CNET are a hardworking lot and they wanted to create an after-Pepcom party in New York where bloggers could drink booze and post. David “The Wonk” Berlind was spearheading this “bloghaus” and asked Pepcom if they could invite a few industry reps to sit with the bloggers and answer questions. Pepcom responded by saying that industry reps were upset that he would suggest such an outrageous thing and that anyone holding a post-Pepcom event would be banned from Pepcom events. This is kind of like banning a bar crawl after a softball game — you’re basically pissing off people who are hot, tired, and have been ducking balls for three hours. The result isn’t pretty.

Ron Pepper, Chris O’Malley (proprietors) and the rest of the crew at Pepcom can take their stinkin’ events like Digital Experience and, well {fill in the blank}. Not only do Pepcom events deserve to be boycotted by journalists, writers, and bloggers, I’m suggesting that exhibitors such as Nokia, Lenovo, Belkin, Palm, Skype, Kodak, HP, Nikon, Casio, Brookstone, Plantronics, Sandisk, Sharp, GE, Toshiba, Kingston and the many others who pay good money to exhibit at Pepcom’s events think hard about the sort of behavior they’re endorsing. Pepcom has unjustifiably come down on me and my company (CNET Networks) like a ton of bricks for doing something as simple as hosting a post-event gathering after one of their events. It’ll be a cold day in hell before I ever come to its events to cover the vendors and technologies exhibiting at them again.

Whoa, right? This is very insider stuff and it’s funny that Berlind posted it publicly.

Why am I telling you all this meta-journalism stuff? Simply because it shows you all what kind of fancy lives we’re living. We get a lot of flack for being Microsoft or Apple pawns and for taking money from Sony to write favorable reviews about Minidisc. We aren’t pawns and we don’t make money and, in fact, people are trying to make our jobs harder, not easier. This also gives you a chance to see what kind of cat fights we have to deal with during our day-to-day coverage and the magic behind the dick jokes and stupid puns that fill your day with joy.

In all honesty, I’d rather outfit a Roomba with a video camera and get a live feed from most of these shows and after shows (and I’d probably get a more interesting coverage with the Roomba bumping up against walls and chair legs) than actually go to these things. However, we must persevere, musn’t we? So now you know how sausage is made, kids.

Pepcom to CNET: If you organize any get-togethers after our events, we’ll ban you [CNET]