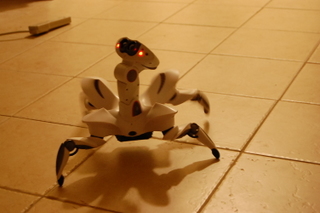 In the 1997 film Fast, Cheap & Out of Control, documentarian Errol Morris took a look at a variety of eccentric characters whose work blurred the line between the human, the animal, and the mechanical. One of the featured characters was an M.I.T. robotics scientist who had spent his career making machines that moved like bugs.

That’s basically the idea behind Wowwee’s latest bugtastic toy: the Roboquad. It’s available this Fall, but we were lucky enough to spend some time with this beastly wonder. Click the jump to see the full hands on. 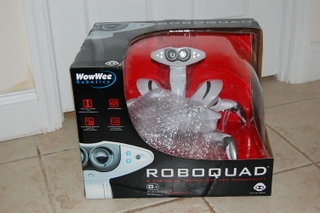 Wowwee, makers of such animatronic wonders as the Dragonfly and the RoboRaptor, is a company that seems to specialize in bringing the sort of robotics work that used to only exist in M.I.T. labs and DisneyWorld’s Hall of Presidents into the toy aisle at parent-friendly prices.

The included remote control allows you to (slowly) move the Roboquad in any of the four cardinal directions. It walks much like a crab, including the ability to do a sideways “crabwalk” that should be familiar to anybody who went to soccer camp as a youth. 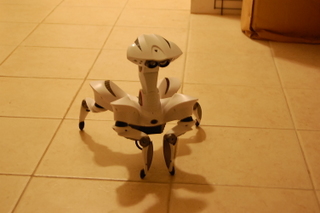 However, like a Roomba, the Roboquad has basic infrared sensors that allow it to detect when foreign objects interfere with its desired trajectory. While they claim that an impending collision with a table or dog causes it to either back up or search for an alternate path, our review unit seemed a bit more bullish in its desire to cause mayhem.

You can even adjust the temperament with which it responds to its environment. Pick “aggressive” and it’ll be fearless, “nervous” and it’ll be skittish. In fact, the level of control this gives you over its character sort of makes it feel like a three-dimensional Tamagotchi. 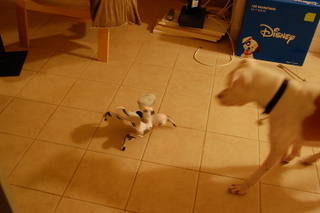 Alright, here’s where it gets creepy. The remote has a big button that says “Demo” on it. Press it, and the thing starts dancing along to an awfully repetitive set of beeps and blurps. As you can see in the photos, it scared the bejeezus out of our dog. Its dance moves sort of look like a bizarre plastic Michael Jackson. 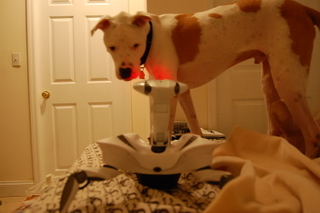 So is this toy worth it? If you’re 10 years old and have 100 bucks laying around, sure, it’s fun. And it’s sensors mean your kid has to try to break things with it (and knowing kids these days, they just might.) But if I was mom or dad, I’d think long and hard about how much of that awful repetitive robotic bleeping I can take. Still, the sheer amount of sensory technology built into a toy that only costs $100 is remarkable. As I said, this is the kind of thing that once would not have existed outside the labs of M.I.T. or CalTech. Now, you can go into any toy store and buy it. That alone is pretty amazing.