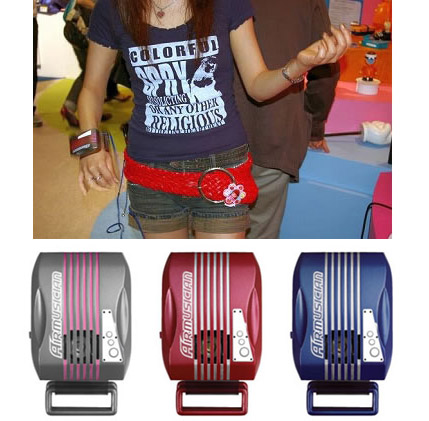 First, watch this video. Wish you could be as cool as that guy?

The Mad House Airmusician wrist band, which hit Japan later this week for around $16, turn you into a bona fide fake rock star. So long as your wrist keeps moving, the band will keep belting out the appropriate guitar licks. There’s five built-in songs—”Black Night,” “Smoke On The Water,” “Walk This Way,” “20th Century Boy” and “Are You Gonna Go My Way”? (No.) Or, you can plug in your own audio source and the Airmusician will play that. It’s important to note that all this does is play back music whenever the unit is in motion; you’re not actually playing individual notes or anything, but more looking like a tool (like the guy in the video) to the music of your choice.

And that wouldn’t stop any of us tools from wanting to try it out.