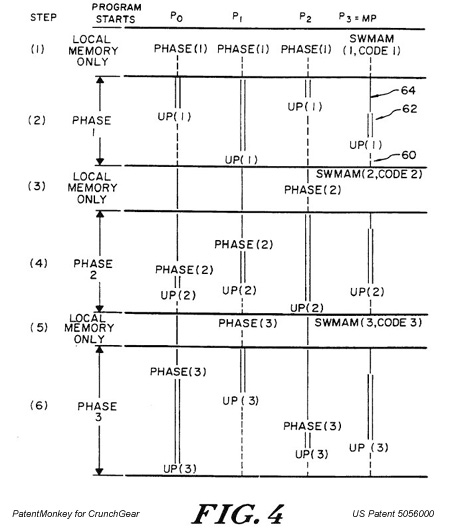 Sony PS3 has to work through a couple litigation suits and can now add the PS3 cell processor to the list. Sony is on the receiving side of a litigation suit that claims that the PS3 infringes an almost 20 year old patent (via the magic of continuations).

Parallel Processing Corporation, which claims to be International Parallel Machines exclusive licensee, claims rights to US patent 5056000. Details and the hefty claim after the jump…

Sony’s PS3 works on a cell microprocessor that is the result of IBM, Toshiba and Sony’s efforts allowing for multi-processing for MMORRPGs. Cool supercomputing gaming stuff to be sure, though, Wikipedia states that IBM’s patenting efforts started in 2001 and Parallel’s patent application dates back to 1988.

Two independent claims are included in the issued patent, claim 1 is:

With a host of prior art listed on the patent, and the lack of obvious existing, competitive business for Parallel, Sony will have a few options to pursue before pulling all PS3’s from the shelves, or destroying them as Parallel may want to see.