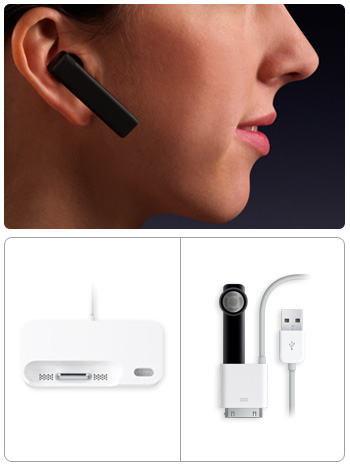 Apple’s first foray into Bluetooth headsets has hit the market, making barely a plink in the ocean of iPhone news so far. I unboxed and tested the discreet little black stick-bud: It still makes me look like a douchebag (all Bluetooth headsets do), but it works well and comes with some pretty cool accessories. It’s a significant investment, but if you already dropped $600 plus service fees for an iPhone, chances are you won’t blink at the $129 for the headset. You can’t use it to listen to music, but at you can walk around looking like some wingnut who’s talking to yourself, and it’s the best iPhone-specific headset going so far.

The iPhone Bluetooth Headset’s packaging is very similar to the iPhone’s, and there’s really not much to setting it up. The little black stick measures about 2 by 0.5 by 0.2 inches and weighs practically nothing (0.23 ounces), and its standard earbud is about the same size as the newer version of the white iPod earbuds. At the top of the stick, there’s a barely noticeable button that powers the headset on and off and also answers and ends calls.

The design is so minimalist that there isn’t even a pinhole for the microphone — it’s actually hidden behind the 4-pin connector at the bottom. The headset also lacks an earclip for stability, and although the earbud has a rubber ring around the outer edge (plus foam earpads are included in the box), I think a lot of people will have difficulty getting a secure fit.

Most people complaint about stock earbuds because they fall out of your ears too easily. That’s why I’m surprised Apple went with this design, despite that the device is impressively small and light, though cannibalizing their existing earbud technology probably helped keep costs down (and profit margins high).

I usually do okay with earbuds; with the iPhone Headset, I was able to shake my head around without it falling out, but only if I put it in my right ear. I let a few other people try it out, and only one out of the five people had the same experience I did.

The awesomest part of the headset is the accessories: In the box, you get an iPhone dock that has a separate slot for the headset, which faces backwards in the dock. You also get a travel adapter, which is basically a regular iPod/iPhone cable but with a small slot on top of the part that goes into your iPhone for the headset. (There’s no AC adapter in the box, but one comes with the iPhone.)

One of the nicest touches Apple put on this thing is that the iPhone’s screen displays the charge level of both itself and the headset while they’re in the dock.

Pairing the headset with the iPhone is a no-brainer: When you dock them both at the same time, they do it automatically. You can go into the general settings menu and unpair them if you need to.

Setting the headset up with another phone — a Motorola RAZR Maxx Ve in my case — is a little trickier. Initially, it took me a couple of tries to get the RAZR to see the headset, but eventually it paired and connected easily; reconnecting was consistently reliable. The LED (green, red, or amber, depending on connection status) is discreetly hidden underneath the skin of the headset, so when it’s off, you don’t even know it’s there.

For voice, the quality of the earbud is fine, though I’m not thrilled with the iPhone/AT&T’s call quality in general. In my test calls, both the mic and the earpiece were clearer than the iPhone itself, and the mic didn’t pick up too much surrounding noise on a busy Brooklyn street. I also found the single button on top easy and comfortable to press when sending or ending a call.

Since the headset works via the Bluetooth 1.5 profile, it doesn’t do music. If you’re just looking for handsfree calling, this is a solid buy even at the “Apple premium” thanks to a smart accessory bundle and a tightness with the iPhone itself. Non-iPhone owners can get a lot out of it too, but you wouldn’t quite be getting your money’s worth out of the accessories.