The SplashCast Facebook application allows users to add a player to their profile that includes a customized skin and comes preloaded with RSS feeds of the creator’s latest videos and images. 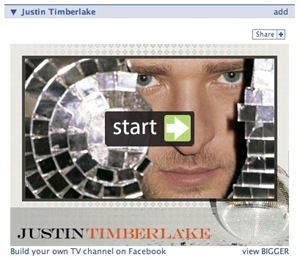 The new player is a big investment in Facebook by SplashCast. They specifically crafted a new administration panel for the application just for Facebook. Through the admin panel, owners can skin the player, manage their channels, and can even control the newsfeed update messaging. In exchange for the effort, they will be charging a base development cost that covers the first 1,000 users, increasing incrementally thereafter.

There have already been a lot of “fan applications” that let you follow a particular show on Facebook, but these have been custom jobs. The SplashCast player makes it easy for companies to create a multimedia fan application of their own.

I continually hear stories of Facebook application developers getting offers for work from companies looking to get on Facebook. White label applications like this may be a way to automate that process.