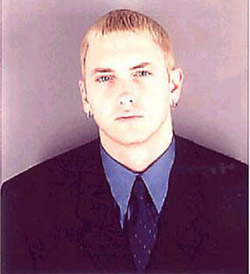 Eminem, who peaked in 2000, has filed a lawsuit against Apple, which peaked on June 29, 2007. The lawsuit centers on the whether or not Universal Music, which publishes Eminem’s hot beats, can deal directly with Apple with regard to selling music online. It seems Em wants more of a cut of that sweet, sweet iTunes money and doesn’t like how Universal can make deals with Apple without his say. (Don’t record labels own the air musicians breathe, let alone their music rights?) Why, then, Eminem is going after Apple and not his label is unknown. It’s also stupid.

The big bad Detroit rapper asked Apple to stop selling his music on iTunes and Apple just laughed in his face, as is its constitutional right. If we remember, Eminem also sued Apple a few years back over the use of his (Universal’s?) “Lose Yourself” in an unaired Apple TV commercial.