Flower power, The Vietnam War, Nixon, The Beatles, Social Networking. OK, so social networking is the odd one out on that list but the folks behind BOOMj.com want to change that.

BOOMj .com is a “lifestyle and social network” for Baby Boomers. According to BOOMj, Baby Boomers make up the Web’s largest constituency, accounting for one-third of the 195.3 million Web users in the United States.

BOOMj.com offers the usual variety of social networking features including blogs, video, friends, relationships etc… as well as travel deals, financial information, health and wellness and celebrity gossip. By their own description BOOMj.com is MySpace meets Amazon.com for the over 40’s.

Overall it’s not a bad offering, perhaps a little too commercial but I’m not in the target demographic. If you’ve flung underwear at Tom Jones or can remember when LSD was legal in the United States, then BOOMj.com is for you. 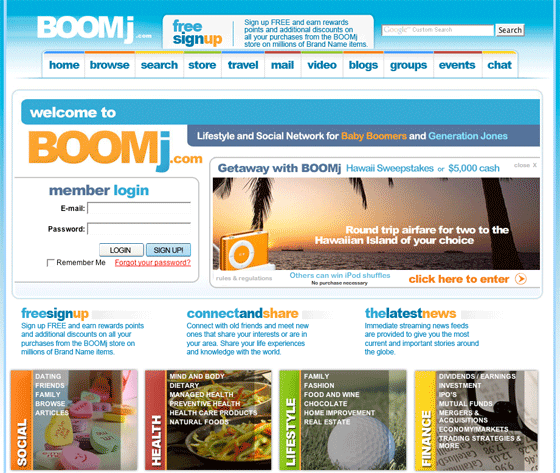