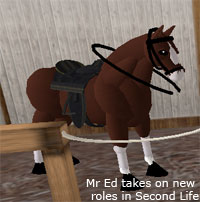 Linden Lab, the creators of Second Life, may be extending their crackdown on “Broadly Offensive” behavior to Bestiality, following attempts to remove virtual pedophilia (or Age-Play) from Second Life in March.

The Second Life Herald (NSFW) goes on to ask whether consenting adults dressing up like animals and partaking in virtual sex with each other or with human shaped avatars (virtual bestiality) constitutes broadly offensive behavior.

“Furries” have a long history in Second Life, and new users are presented with the option of taking an animal form when first setting up their avatars.

Second Life fans will argue that sex-based play in Second Life only makes up a small portion of Second Life, but it remains a popular pursuit; the popular destination lists for Second Life regularly feature nightclubs and dedicated sex spots (or as is sometimes the case, nightclubs that are sex spots as well).

The arguments for and against this sort of behavior can and does result in heated debate; on one hand what consenting adults do virtually with one and other should be strictly up to them, on the other hand these acts aren’t being done in complete privacy but in a virtual world were others may be exposed to it.