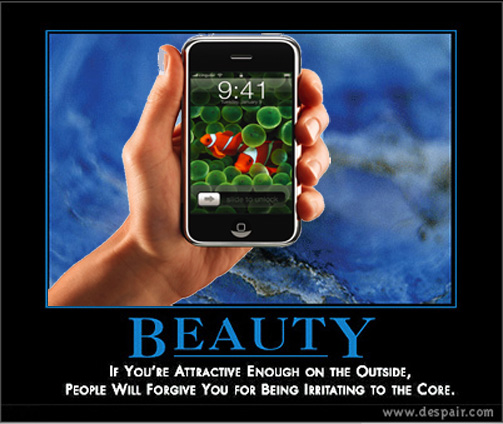 I was riding my bike the other day, when I got a call from Apple. I pulled over to the curb, and by the time the light on the corner changed, an iPhone was on its way to my apartment. I hadn’t even requested one, yet 36 hours later, it arrived.

Sure enough, within an hour I was compulsively checking email and surfing the Web on it, like a kid picking at a mosquito bite.

I did pretty normal stuff with it: checked out the features, loaded it up with music and vids, and found a few things to gripe about. But some people out there are interested in doing more than just the basics with the iPhone.

I took my iPhone to my local pub so I could have a beer and check my horoscope online watch some YouTube clips. Within two minutes, some nutty-looking guy was asking me whether the iPhone sucks or not, and in return for my 15-second answer, he bought me a beer! Conclusion: The iPhone is not a chick magnet, but it can get you pretty drunk.

After a couple of beers, I started to get some funny ideas about things to do with my iPhone. For starters, I kept it in my back pocket for a night — my own special torture test — which resulted in a nice dent in the back of the casing after I sat on a stone ledge. But apparently, that’s just scratching the tip of the iceberg.

1. Rant about its effects on the mind to a bunch of teens.
Some woman escaped from her house full of cats to vigorously caution a bunch of teens against the dangers of the iPhone. Note the intensity of the teens’ response… not to mention the lady’s awareness of how insane she appears. This video makes me feel uncomfortable the same way watching Jerry Springer does.

2. Blend it.
This clip of the host of Will It Blend pureeing an iPhone has already achieved an infinite number of clicks — twice! It disturbs me that the guy isn’t wearing a protective mask when he opens the blender and black smoke from the ruptured battery begins to pour out. I’m proud to say I resisted the urge to try out my own recently purchased blender to make iPhone margaritas.

3. Start stealing random things when you see an iPhone.
You know it’s a slow news day when the news itself becomes news. Someone steals a news reporter’s microphone as she interviews one of the early iPhone testers. Would’ve been nice to have had a secondary camera to catch the beatdown — which should have been for not snatching the iPhone instead.

4. Worry that it might destroy society.
And now a word from Dr. Bruce Weinstein, of BusinessWeek’s Contradictory Statement Department: “Our social fabric is in danger of being ripped to shreds as we swap electronic connection for personal relationships. The very nature of community depends upon us being connected to one another.” I’d prefer not to think of Steve Jobs having the power to bring about the end of civilization, but he can be pretty impressive at times.

5. Eat it.
The iPhone, eaten raw, doesn’t quite have the same kick to it unless you blend it. Or at least make it out of cake.

6. Beat the hell out of it to show it how tough you are.
Ars Technica did a “stress test” on the iPhone. They keyed it, they slashed it, they tossed it on the ground. The person in the video does it all so casually — I bet the sequel features flower-stomping and puppy-kicking. Just wait until the next version of the iPhone comes out, complete with defenses like thorns and laser beams.

7. Make a musical about it.
David Pogue’s musical about the iPhone was definitely the most f-ed up thing I’d seen on the day it came out. Like Flashdance, however, its day in the sun was short and sweet.

8. Use it as a justification for your conspiracy theories.
Not sure how I found this one, but it’s a pretty strange connection this guy’s trying to make: Apple’s video tutorials on how to use the iPhone show some news headlines from NYtimes.com on the phone’s screen. Somehow that means Apple has a political agenda. I was skeptical at first, but Apple doesn’t usually make marketing decisions lightly. Maybe Jobs is building up his presidential platform for 2012?

9. Use it to replace a human heart.
An artificial heart with CoverFlow — Dr. Robert Jarvik has nothing on Steve Jobs! Seems like it might work better as a brain transplant though.

10. Dress your kid up as one.
(Sigh.) It won’t be long before iPhone addiction becomes a diagnosable disorder. Looking for the root of the problem? Look no further.

Just don’t refer to it in your… err… home videos–no one thinks that’s hot.