With Microsoft getting into the Live P2P television game with Livestation, interest has been growing in the space. We covered a number of leading operators earlier this month. On that list was the European focused company Zattoo with a product that is currently only available in a number of European countries, and only then by invite.

The folks at Zattoo were kind enough to offer me a 7-day trial pass to Zattoo and I’ve been playing with in now for 24 hours. My conclusion so far: Zattoo is awesome.

This is how Zattoo describes their offering; every single part of it is accurate:

Before Zattoo, TV on the Internet wasn’t like TV at all. Video streams skipped, stuttered and broke up; image quality was lousy. Zattoo puts real TV on your computer. Our revolutionary technology provides the true TV-quality video delivery and smoothness everyone’s been waiting for. 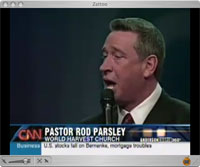 The trial access I was given was to the Swiss version, so the number of English language channels was limited, yet the total number of channels is strong. There would be at least 30 live channels covering a gauntlet of free-to-air offerings as well as a large number of cable channels including CNN, Al Jazerra, BBC World, Bloomberg, CNBC Europe, France 24 English and MTV.

The client itself is easy to use; channels are listed to the right of the viewing box. The viewing window can be resized as needed or switched to full screen.

Quality is where Zattoo is the stand out offering in the space. It’s not 1080p HD viewing, and at full screen on a 22″ monitor the quality isn’t brilliant, but it was watchable. From a window though the picture quality is clear and easy to watch. Better still, the picture doesn’t stutter nor pixelate; it just simply works. I tried everything to make it break, downloading a large file, Twittering, downloading email and surfing the web all over a 2mb cable internet connection; the picture never once skipped a beat. I don’t know how they’ve done it, but they have, and not even services such as Joost have managed to get this totally right so far.

The service is currently free whilst in beta, with plans to eventually offer a free basic service whilst charging for premium channels. Advertising consists of pre-rolls that appear for no more than a couple of seconds while the channel buffers; there is a delay in each channel appearing but it’s no more noticeable than a similar wait on Joost.

There was only one thing that annoyed me with Zattoo: they only gave me a 7-day trial. If the price were right I’d pay for more. Zattoo is the future of live television on the internet and on what I’ve seen so far I can’t recommend it enough. And yes: they also offer a Mac version. 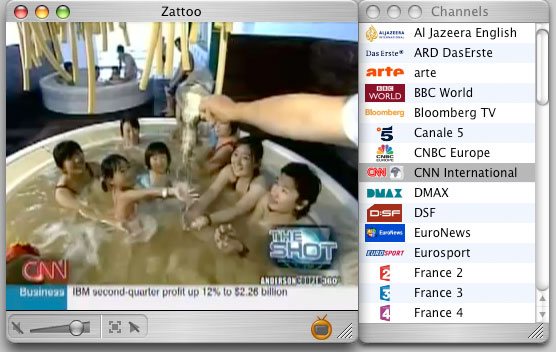