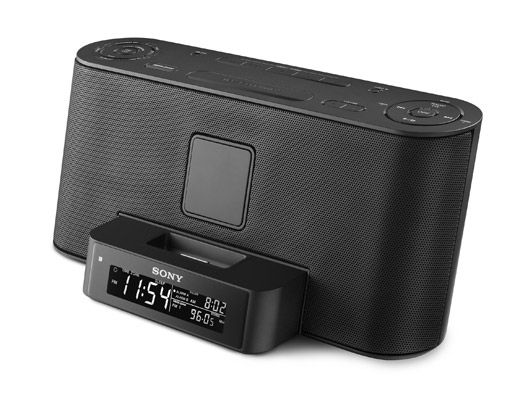 Good ol’ Sony wants you to wake up to the gigabytes and gigabytes of white labels you’ve downloaded in order to get your day off to a fabulous start. To do that you’ll needs its latest clock radio, the ICF-C1iP. It should fit right into your daily routine of waking up at 6:30 a.m., putting on your makeup and doing your hair, then heading out the door to crack rocks all day long. The radio uses those iPod dock adapters that you should be familiar with by now, so it’s compatible with most iPods. (Hopefully the new ones, too.) It’s got all the standard fixings like wireless remote control and automatic DST settings. It’s a radio, what do you expect?

Sony’s also rolling out an iPod boom box, the ZS-S2iP. You know the drill: plug your iPod in, or plug in some other audio source via the aux inputs, decent sound, etc. Both are only $100 and should be here by next month. I actually said in the CG chat room, “hey that sounds pretty neat.” Then my co-workers teased me for saying something nice about Sony. Haters.