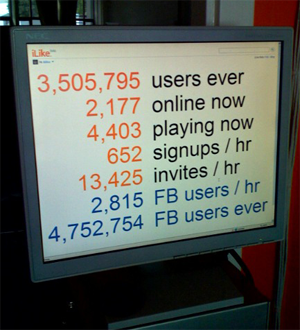 I had a chance to visit music social network iLike’s Seattle offices yesterday to meet with co-founder Hadi Partovi. The first thing I noticed when I walked into the office was a flat panel display showing key real time stats for the company – see image to the right. I took a picture as Partovi looked on nervously. These stats haven’t previously been publicly disclosed, but he agreed that I could publish them.

iLike launched last October. In the nine months since they’ve gathered 3.5 million users (the orange stats in the picture), up from half a million in February. Not bad. But what’s really impressive is the fact that in less than two months nearly 5 million more people have signed up for the service on Facebook, where it is the third most popular third party application.

The difference will only become greater – 2,800 Facebook users are joining every hour, whereas the main site only gets 652 new users/hour.

Much of the popularity of the iLike Facebook application is driven by something called the iLike Music Challenge, where users try to guess songs or artist names based on listening to a 30 second snippet from a song. Users get points for correct answers (and more points for fast answers), and compete with their friends. It’s highly addictive and viral – Partovi says the average user session last a whopping 80 songs. Since points are public, I can see that a lot of my Facebook friends are totally addicted to this. See the screen shot below, and click for a larger view. 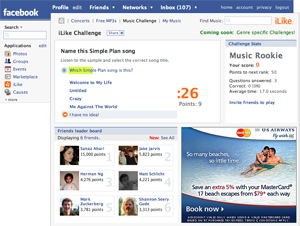 But iLike has a bit of a problem, because it has two distinct sets of users using two different products. There isn’t much overlap between the two groups, he says, because the Facebook application isn’t promoted on the iLike website.

The company is currently dedicating resources to merge the user groups and make the functionality between the products identical (or at least more similar). They’ll start by comparing cookies to find cross-users. If cookies from both products are on a user’s browser, they’ll ask if they have accounts at both and optionally merge them.

While they’re in the process of doing that, they continue to support the two products separately. All new beta features are released on both platforms, so its just the legacy stuff that needs to move. The most important features are the data gathered from the iTunes plugin – users want to show playlists and the music they are listening to on Facebook. All of that is coming soon, the company says.