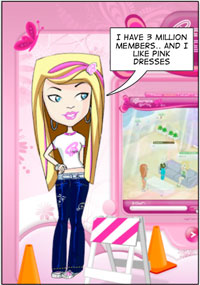 Mattel’s virtual world Barbie Girls hit the 3million user mark in its first 60 days and is growing at the rate of 50,000 new users a day, according to a report from the Scientific American.

Barbie Girls allows users to customize Barbie dolls, dress them up, create virtual homes, adopt pets and chat with other users. The service is free to play with a revenue model focused on the purchase of virtual goods.

It would be easy to dismiss an offering like Barbie Girls (feminists are probably going to roll their eyes at the whole concept) and yet 3 million registered users in 60 days does say one very, very clear thing: virtual worlds are going mainstream and the user base is dramatically shifting from being predominantly male to majority female. That shift isn’t quite as important now as it will be in the next 5-10 years as those playing Barbie Girls grow into adults; simply the next generation of online gaming and virtual world users will not be dominated by men.

*WOW figures of 8.5million users are paying, regular users where as the Barbie Girls figure would be registered users as opposed to regular players. Barbie may have a much lower regular player figure as Second Life does.

(in part via World in Motion)