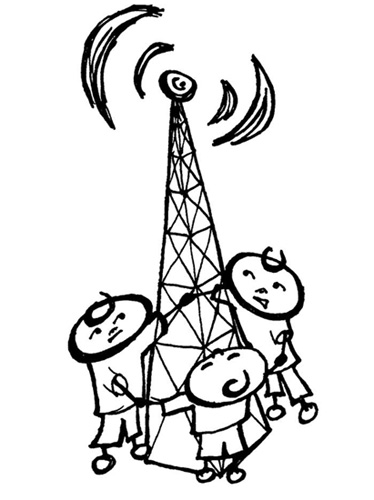 Satellite radio is in the toilet, and the government and the recording industry are trying to squeeze Internet radio for more dough — unsuccessfully for now, according to today’s news. Meanwhile, social networking sites like Imeem and Last.fm (and MySpace, of course) are continuing to blow everyone away in the digital music scene, thanks in no small part to their focus on community as well as music discovery.

It’s crystal clear that the Internet holds the future of radio. But there’s no reason social networking sites, Web radio, and music subscription services shouldn’t all be part of the killer app for music discovery, but mobility is still a major limiting factor. Now that we’re in the iPhone era, the hardware exists for removing mobility as an obstacle.

Satellite radio companies XM and Sirius have a combined 14 million users, and their merger is still in regulatory limbo. Talk about a great idea that was essentially squashed by industry forces. But Web radio is looking to step in to fill the void, despite having a brush with the U.S. Copyright Royalty Commission, which is trying to make it more expensive to broadcast songs on the ‘Net. (Thankfully, SoundExchange has announced it will not enforce the rate hike that was scheduled to begin next week.)

The big news this week is that CBS-owned Last.fm just added Sony BMG’s entire catalog to its arsenal, giving its roughly 20 million users access to streaming music from all but one of the major labels. That’s pretty impressive, and it makes Last.fm the largest Internet radio service in the world.

Last.fm is a pretty hot service if you’ve never used it; the service’s unique recommendation system (called “scrobbling”) creates instant radio stations by keeping track of what you listen to most often — including tracks in your own music management software and even on your MP3 player. Privacy issues aside, it makes for a pretty mean music discovery platform, and you can opt out if you’re paraniod. The social networking features (inviting friends, making recommendations, and seeing what others are listening to) are what give it potential to deliver on what the Microsoft Zune promised in terms of sharing.

But something’s still missing: You can’t take any of that content with you when you head out for the day. (Last.fm does provide links to Amazon.com for tracks you’re listening to — but only so you can buy the physical CD!)

I asked Matt Graves from RealNetworks’ Rhapsody service if Rhapsody would ever get into social networking, since it really adds a lot of value to online music. While he couldn’t give me specifics, he did confirm that “we plan to get into the social networking side of online music. […] We’re going to be doing some things on this front with Rhapsody in the coming months — so stay tuned.”

With regards to the success of sites like Imeem and Last.fm, he contends that “social networking is just one aspect of it. In our mind you need to be able to combine solid curation, the wisdom of the crowd, and unlimited access to music. THAT is the killer app.” I think he’s right there, but I also believe it’s critical to take all that into today’s mobile world.

Companies like Microsoft, MusicGremlin, and SanDisk have experimented with various methods of getting music lovers to discover and share music using dedicated music players with wireless capabilities. But none of them really swung for the fences.

Devices like the iPhone are changing this landscape, giving users access to broadband wherever they are. (Yes, I know the iPhone uses the slow EDGE network, but it won’t always be that way.) If Apple partnered with Last.fm and integrated it into the iPhone — and with the iTunes store — it seems like everyone would benefit. Apple’s iPhone-centric parternship with YouTube gives me hope for something like this.

Connecting like-minded users via social networking, letting them listen to and rate virtually limitless content for free even when they’re on the go, recommending new music effectively, and giving them the opportunity to capture that music and take it with them… It may sound too good to be true, but it’s only a matter of time before it’s a reality.

(The illustration above was created by Leah Perrotta, a Brooklyn-based artist and all-around lovely gal. See more of her work here.)