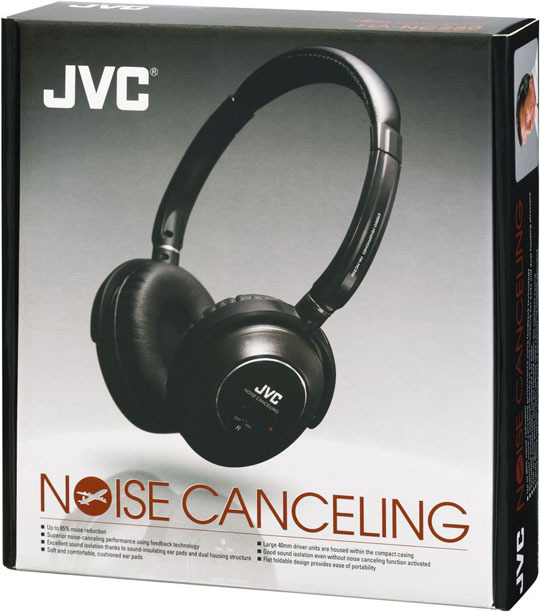 It’s Super Friday! You know what that means, folks. Time for really exciting gadgets! Today we have the JVC HA-NC250 headphones with “state-of-the-art” noise canceling features. How does JVC accomplish this feat?:

The HA-NC250’s noise cancellation circuitry includes feedback technology that constantly monitors the noise cancellation process. As a result, the headphones eliminate up to 85 percent of extraneous background noise. To further block noise, the HA-NC250 offers two JVC innovations that help isolate the listener from outside sounds. First, each earpiece employs a double housing structure for an extra sound insulation layer. Second, JVC developed a new technique for attaching the headphone’s smooth memory foam cushioned ear pads to the housing that helps isolate background noise. The smooth pads also enhance comfort. These sound isolation features, for which patents have been applied, are especially important since the HA-NC250 can be used with the active noise cancellation switched off.

The headphones use 50mm neodymium drivers in each earpiece for explicit sound and clarity. You can fold them up and throw them in the included carrying case, which you’ll want to do considering these babies cost $199.95. You’ll be able to snag a pair in late August at wherever fine electronics are sold (read: Tweeter).