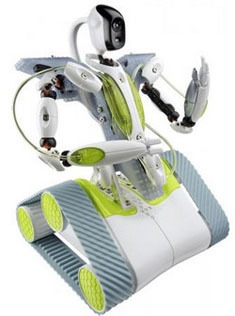 Oh, and did I mention the included Skype compatibility and motion detector Spykee has? With a built-in camera and mic, you can totally hold Skype calls with whoever you want via a robot. He plays MP3s too. If that’s not cool as hell, then I don’t know what is. Surprisingly, Spykee isn’t that expensive. Only $388 and you’ll be well on your way to checking out chicks in the locker room without getting caught.