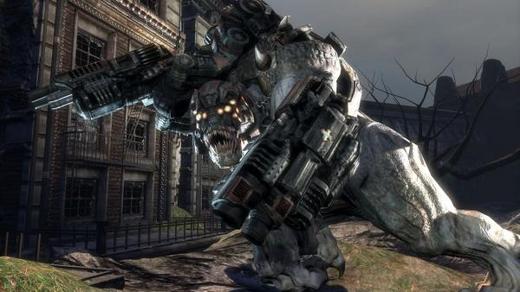 Previously reported with a launch date of “eventually”, Gears of War for the PC has been tagged with a somewhat less murky launch date of “sometime holiday season 2007” and a street price of $50.

Lest you think that this will be a straight-up Xbox 360 port, the Windows version will offer five new campaigns, three new multiplayer maps, and an extra multiplayer game scenario. Multiplayer will not be cross-platform, unfortunately.

Perhaps most refreshing of all is that Gears of War will be compatible with both Windows Vista and Windows XP — here’s a big thanks in advance for including us old-timers in your little video game club. The Vista version will take advantage of DirectX 10 technology, so it should look pretty gorgeous and it’ll probably make me upgrade my computer once I see it running on someone else’s fancy new rig.

Oh and one more thing: The Brumak, that huge monster-looking thing from the Xbox 360 version’s cutscenes, will be fightable on the PC version. Good luck everyone.