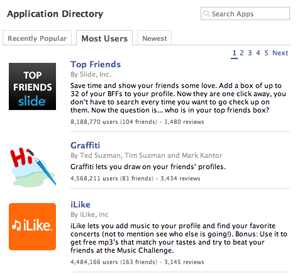 Here’s another indication of the importance of the new Facebook platform: Silicon Valley VC fund Bay Partners has earmarked millions of dollars for investments in startups creating applications for Facebook. The new program, called AppFactory, will be officially launched on Tuesday.

Like the Charles River Ventures Quick Start program, the idea is to allow entrepreneurs to raise a small amount of capital with a minimum number of hurdles. Bay is promising to make a decision to invest within a couple of days of meeting the company, bypassing the normally weeks-long process of raising capital.

Unlike the CRV fund, though, AppFactory is investing only new Facebook applications. Salil Deshpande, the Bay Partner who will run the program along with senior associate Angela Strange, says that Facebook is now the Social Operating System, and that new platforms and systems historically lead to a new economy. Bay wants to be in the middle of that economy and fund as many of the “killer applications” as they are able to find.

Salil says 40,000 developers have requested keys from Facebook to create applications, and over 1,600 have already launched on Facebook.

AppFactory will be making up to fifty investments ranging from $25,000 to $250,000. Salil says that they have preferred deal terms, but are willing to consider making equity or debt investments, and will work with co-investors as well. Basically, he says, they want to help entrepreneurs build and monetize Facebook applications with a minimum of hassle.

Is the Facebook platform real? Some people question the intelligence of entrepreneurs who build their new companies entirely on the back of another startup. But in general I agree with venture capitalist Josh Kopelman – building for Facebook removes many of the risks associated with getting a startup off the ground.