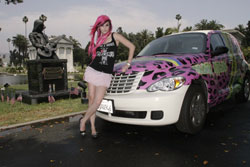 Music focused social networking destination Buzznet, a service that we noted May 24 as being the biggest social network many may never have heard of, is taking their message and brand on the road.

Kitching will send video and written dispatches that will include backstage interviews with bands and live discussions with the fans. Kitching will be traveling in a custom Buzznet PT cruiser (see photo), giving Buzznet exposure to millions of music fans and fellow highway travelers; although I’d note looking at the car that it may also blind fellow highway travelers as well.

It’s a clever idea in an age where social networking sites are a dime-a-dozen. Being there no longer cuts through, being seen is the key for any startup. I’m told that Kitching will be free to report events as she sees them, so this isn’t a case of Wal-mart style astroturfing. Although some will not be in the target demographic for this style of promotion, it’s not hard to appreciate this as being a smart marketing move by Buzznet.