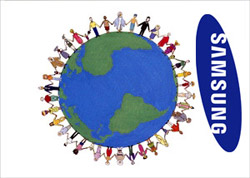 As we approach the release of Samsung’s BDP-UP5000 combination Blu-ray/HD DVD player, more and more details are finding their way to the Intertubes, or whatever funny word we’re using to describe the Internet these days. Reports out of Germany (where else?) suggest that the combo player will support all the features of both the Blu-ray and HD DVD camps. I know Toshiba just announced a firmware update to its HD DVD players last week that are wholly dependent on an active network connection, so it’ll be interesting to see if “all” really means “all.” The player is also expected to output movies at their native 24 frames per second (and even up to 60 frames per second, for that “Jacob’s Ladder” [01:46 in] or “The Ring” fast-motion effect).