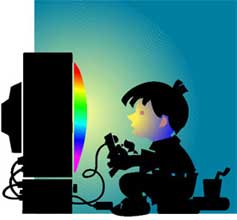 A recent study that appears in the June issue of Archive of Pediatrics & Adolescent Medicine (come on, who doesn’t subscribe to that?) suggests that video gamery has little to no effect on youth (age 10-19) social and educational habits, such as they are. First off, 80 percent of all gamers are boys, so there’s no need to worry about girls. Of the young men, only 36 percent of them actually play video games, so again, no need to lose our minds here.

Of those that play games, they only spent about an hour per weekday playing games and an hour and a half on the weekend. While it’s true that gamers spent 30 percent less time reading than non-gamers, non-gamers only read about eight minutes per day anyway. So I guess the problem is that our kids don’t read enough as is, not that games are making them dumb.

I suggest parents adopt the rules that mine did as a boy: no games during the week (and do your homework or else), play as much as your eyeballs can stand during the weekend.