Mozilla and eBay have launched Firefox eBay Edition, an eBay focused version of the popular Firefox browser, along with an official eBay addon for existing Firefox users.

Firefox eBay Edition and the alternative addon works for European eBay sites including the UK, France and Germany.

Functions include
– An eBay sidebar that provides quick access and real-time updates on items users have bid on, are selling or watching
– Status alerts, including outbid notices
– Integrated eBay search
– Built in support for eBay’s Account Guard

Providing branded or customized versions of Firefox is not new; Google already offers its own Firefox download with Google tools installed as standard. Where this offer differs is in the provision; this isn’t a customized version being offered by eBay alone, eBay Firefox Edition and the related addon are offered for download by Mozilla itself. Whilst Mozilla is more than entitled to partner and provide such a service, open source purists may see the deal as Mozilla selling out. The financial details of the deal were not disclosed. 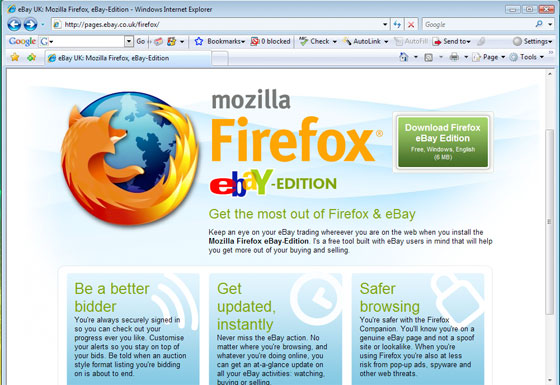