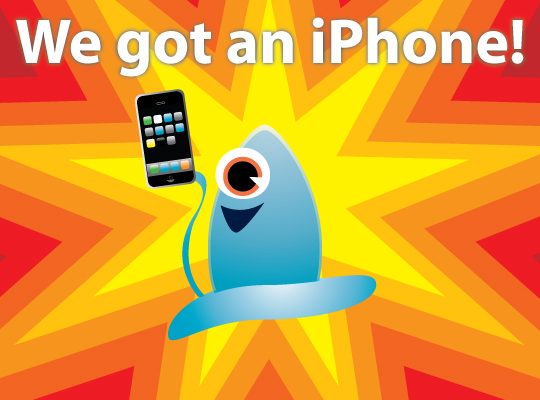 There is an irony to the fact that there are companies who make their living turning out crappy phones model after model, and then someone like Apple comes in and shows them how it’s done. The iPhone just might live up to the hype, but it’s not perfect. Yet.

I’ve been using the iPhone for the better part of a day. It arrived here at CrunchGear HQ at 9:41 AM. I’m the kind of guy who’s nearly comatose on a Saturday before noon, but I was excited when I hear that the FedEx guy was at the door. I knew what he had for me, and I’ve been waiting for it for quite awhile. I ran to the front door and there was a box from Apple with my name on it, along side a snarky FedEx delivery guy. Whatever, he wasn’t going to ruin my iDay.

Since then, I’ve done about everything with it you can, and I’m happy to say that the things that it does it tends to do quite well. Sadly, there are things older phones can do that the iPhone simply doesnt even attempt. The interface is a dream come true, there’s no doubt about that. Handset-wide, it’s a pleasure to use and doesn’t have any learning curve that anyone remotely familiar with computers couldn’t conquer in moments. I’ve handed it off to several first time users over the last two days and asked them to complete a task, and after some initial orientation and jitters, nobody had a problem.

When it comes to Apple’s core business, it can be said that the iPhone is a solid musicphone, probably the best I’ve ever used. The iPod program should really be called iTunes, as it’s much more similar to the desktop implementation than the portable hardware. Coverflow works fast and flawlessly, though if you’ve songs or albums not listed in the iTunes cover databases, it’s not as attractive. You don’t have to use it, but I can’t imagine anyone not wanting to. 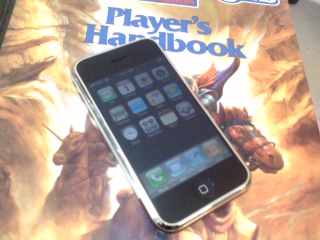 The photo application is basic as can be, but it works. Traditionally, photo apps and camera apps were combined into one, whereas here they’re separate. Personally, I like the one-touch access to my camera. When my friends are doing something foolish, I don’t want to have to tell them to “hold that pose!” when the five-oh could be along any moment, and the iPhone delivers here. The photos aren’t great, typical of modern cameraphones. They’re better than most, however, so that’s something. One major concern of mine is the lack of a flash. The iPhone is marketed towards 20-somethings who are young and hip. The young and hip are often in dark bars, and dark bars require cameras to have a flash. Hopefully version 2.0 will address this. Again, this is personal preference on my part, but high-ends phones tend to have this feature. And does your phone do video? This one does not.

The idea that version 2.0 of the iPhone will fix it is a phrase I’ve said often today, as the iPhone isn’t quite what it could be. Besides lacking a flash, the phone is only 2.5G, meaning it’s slower than any handset on the market of comparable cost. I know I’m not the first one you’ve heard this gripe from, but it’s a glaring omission that can’t be dismissed.

Besides the pokey network speeds and the mediocre camera treatment, the iPhone isn’t something I’d wish on anyone who sends more than the occasional text message. Most phones allow you to compose a message and send it to several contacts simultaneously. The iPhone allows you to send one message to one person at a time. I can’t live like this. When I’m on the move, which is all the time, I have to keep my posse updated to my current whereabouts. Sending one message at a time rather than 5, 6, or 26 is seriously going to cut into my socializing time. This should be fixable with a simple firmware upgrade, and as I’m surely not the only one with this problem, I see it in the future. This is another matter of personal preference, but yet another feature common on low-end phones that Apple chose not to include.

Oh, and that one-text-at-a-time can’t include photos or video. For being so hi-tech, you’d think the iPhone could send an MMS message, but it cannot.

You know that we like to complain that CDMA carriers cripple the Bluetooth on the handsets they carry? The iPhone does it too, which totally sucks. I’ve got a number of Mac’s with Bluetooth, and the idea that I can’t just send a photo from my iMac to my iPhone via Bluetooth makes no sense at all.

That’s the bad, but the good might just outweigh it. Besides being a superb music device, the Web browsing capabilities are awesome. That’s the only word for it, “awesome”. Multitouch with Safari is the most intuitive way to browse the Web sans mouse-and-keyboard that I find myself wondering where it’s been all my mobile life. Even at an “extreme zoom-out”, I can navigate a page and find what I’m looking for. And the browser delivers the Holy Grail of mobile Web browsers that nobody else has been able to touch: multiple browsing sessions. Firefox and Safari for desktops have tabs (and that other browser). Safari on iPhone has multiple, scrollable windows. I really can’t describe how they work, but it’s worth checking out.

Pages render fairly quickly and have full formatting, a very nice feature. While some more advanced features are absent, you won’t miss them. It just works.

The smaller widget apps are fantastic as well. Weather and Calendar fast and exactly what you’re looking for, and the same can be said for Stocks and Calculator and even Notes. I personally think they should all be wrapped up in one larger application, but hey, my last name isn’t Jobs.

The last big app we learned about for iPhone was YouTube, and it’s pretty awesome. Videos look fantastic on the screen, partly because of the amazing optical hardware, but we’re getting into that a little bit farther down. The search works well and vids load up quickly in H.264. Not everything is available, though. Word is that’s to be fixed by early winter, so that doesn’t go on the negatives list by any means.

Google Maps is a little tricky. While there’s no GPS involved, it’s easy to manage. Anyone who’s used the Palm OS version should find it easy to find their way around. In fact, it’s maybe too easy: while centered into my home in Seattle, I couldn’t figure out where to type in a search term. Turns out it was the same place I used to locate Seattle. I was fully expecting a separate search box, but then I always think things are going to be harder. It’s fast and accurate, and for some might be reason enough to push them over to the iPhone camp.

So we’ve got through a lot of features, which was expected. What’s really intriguing about the iPhone, though, isn’t just how easy it is to get around these capabilities (it is), but rather the attractive package they’re presented in.

Design-wise, the iPhone isn’t a homerun, it’s a grandslam. Besides all th features mentioned above, it also makes voice calls on AT&T’s GSM network. We’ve heard fussiness from other blogs about how it’s a pain to make a simple phone call. These people must be idiots. While it’s not as fast as opening a clamshell, unlocking the phone is a piece of cake. Hit the Phone icon, and you’re set. I can’t find anything wrong with the way the iPhone does it.

It’s the hardware that sells it, though. Anyone who sees the iPhone in action starts to salivate with envy and lust that only Apple can generate. The phone just feels right. The size and shape are perfect, the screen is huge and bright, even in direct sunlight (it was a nice weekend in Seattle). The weight is firm. Not heavy, but firm. There’s no other adjective in my spellcheck for it.

Speaking of the screen, it is a little bit smudge-prone, but the same goes for any phone. I can’t see why some are unhappy with how it works.

Apple did borrow one thing from the Treo line of smartphones: the popular ringer mute switch. It’s as welcome here as it is on the Palm handsets, and is a lifesaver at movies.

After all is said and done, the iPhone’s not perfect, but as a first effort, it excels. There are some missteps, but nothing that Apple won’t be able to fix. Most of the problems I have with it are due to the type of phone user I am. I’m a fan of mature features that most people wouldn’t use, usually in a complex smartphone form. Thus, the iPhone in its first incarnation is not for me. But if you’re living in the world of RAZRs or Samsungs or other regular phones, then the iPhone is going to blow your mind. Even if you are a seasoned phone snob, you can’t ignore that most aspects of the iPhone are lightyears ahead of what anybody else is doing, and in all the industry-changing ways we’ve come to expect from Apple.

Check the iPhone out. Don’t be scared of it. It’s intimidating right up until you get your hands on one, then it becomes magnetic. While it’s not for everybody, it will be eventually, but chances are pretty good that it’s for you right now.