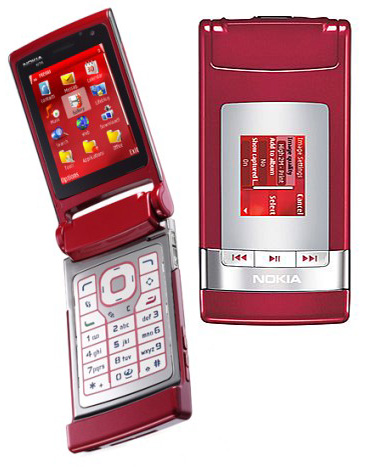 It used to be that you could get Nokia phones in any color as long as it was dark blue. Now, however, Nokia has decided to add a little color to their staid line-up with the N76, an odd little clamshell with a beautiful 2.4-inch screen and dedicated music controls.

The N76 is a smartphone. It runs Symbian S60 and comes in WCDMA and GSM flavors. It doesn’t seem to be available on our shores quite yet — if I have it my hot little hands, however, that means it should be online and in Nokia stores any day now. I can’t confirm right now, but it doesn’t look like any carriers will pick this old girl up, so you may need to spend about $499 on it.

The phone itself is quite stylish with a 2-megapixel camera and bright chromed color scheme. It his 13mm thick has 26MB internal memory with a hot swappable microSD card slot. It lasts about 160 minutes on one charge although I saw standby times of about 10 days with little use.

There are chromed buttons on the front to control music playback and a birght 1.3-inch cover display. It supports most music playback including Windows Media DRM songs. There’s also an FM tuner.

The device has a RealPlayer built in so it can play a number of video formats and stream video from video portals. Oddly enough there is no WiFi in this puppy, which could put off some purchasers.

The N76 is kind of a “high-fashion” smartphone. Because it runs S60 you have just about everything you could ask for — mail, IM, Symbian app support. But because it looks like a RAZR on steroids, it won’t make you look like too much of a geek. A very nice trade-off.