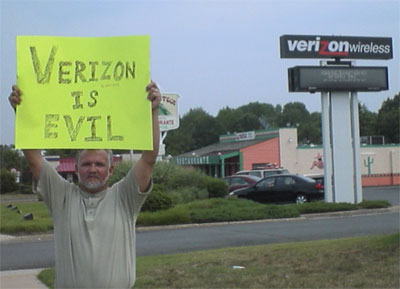 As it turns out, the iPhone really is “all that,” making AT&T’s rivals a little nervous. Verizon Wireless, which counts me as a subscriber, put together a list of things that’ll make you wish you never heard of the iPhone, let alone—gasp!—cancel your VZW contact and switch to AT&T. VZW hates on the touchscreen, saying “And how are you going to type without looking with a keyboard you can’t even feel?” Good point, what else you got? How ’bout, “Wi-Fi is not a mobile technology. You have to be in a fixed location to use it — and that’s if you know where to find it. And some Wi-Fi hotspots make you pay to use them. There’re also those pesky concerns about security of Wi-Fi…” Damn, another point for VZW.

Lastly, the killer one-liner from the VZW Snaps Dept. is “Stay near a plug.” I guess that implies that the non-removable battery will die soon, which just isn’t the case. But whatevs. It’s BAAAD.

I’d say that the average Verizon sales rep will never have to use these tactics. Anyone calling to transfer their phone number to AT&T probably already bought and paid for their iPhone and the regular folks who might think the iPhone is cool probably won’t jump ship for anything more expensive than a $50 RAZR. The deal is done, Verizon. Now it’s up to you to make it easier for manufacturers to get cool phones into the market and to not bloat them up with crippleware and bastardized wireless standards. Oops. Sorry. That’s now how you operate, right?

Verizon to prospective iPhone buyers: ‘Stay near a plug’ [AppleInsider]