Ever since Microsoft launched Live Search last year, they’ve been keeping a steady pace of new services integrations as they grow the Live Suite, specifically integration between interfaces for mobile, desktop, and web, as well as between the users themselves via Live Spaces. The biggest piece to fall in place recently was the replacements for Hotmail and Outlook Express, the Windows Live Mail desktop and web client, which also featured Messenger integration.

Eventually Microsoft plans to release all the pieces of the Live Suite as a single upgradeable download as well as separate programs and services. 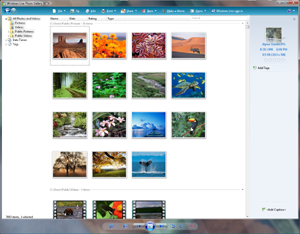 Windows Live Photo Gallery beta is an improvement on the initial version of Photo Gallery they shipped with Windows Vista now made for XP as well. Photo Gallery is a free program that lets you easily download photos from your camera, organize, edit, and upload them to your Spaces account. Photos are organized by a familiar file tree structure by folder, date, tag, or album. Editing features include brightness/contrast, cropping, color control, and red eye reduction. You can even edit the photos into a video slide show using Microsoft Movie Maker (WMV MPG AVI).

Uploaded photos will eventually be linked to the ones on your desktop, allowing changes to tags, albums, and eventually photo captions to be synced with one another. Microsoft is planning to implement a service that will enable users to securely grant access to their photos for third party sites to use. All the galleries will be available on your phone through your browser.

The cool new feature for this release however, is photo stitch, which sews together multiple photos into a panorama. The Microsoft team demoed the feature for me by snapping some photos of the San Francisco skyline as they walked around their hotel’s patio. Live Photo Gallery did an excellent job of nearly seamlessly stitching the photos into one continuous strand even though they were taken from different vantage points. Although photo stitch isn’t powered by recently acquired Photosynth, the team will be integrating the companies Seadragon technology into the program in the future.

Here’s some before and after of the photo stitching:

Originally called “Live Drive” and widely anticipated, Live Folders is getting off the ground before the rumored GDrive. The service is being launched into a managed beta which will give a select group of testers 500MB of free online storage space. The new storage system will be located on an entirely new computing infrastructure Microsoft has been building to power Silverlight Streaming service and Hotmail system.

The beta system is pretty straight forward. Users can upload files via a webform and possibly an ActiveX control in the near future. Once on the system, files can be marked public, private, or be shared with other Live users by user name or through email by permalink. Files will be download only since Microsoft doesn’t have an office web suite yet. They will also be continually adding greater integration between Spaces and Folders so that files uploaded to one show up on the other.

The Folders beta is mainly meant to get user feedback to be used in future iterations. Microsoft already has plans to incorporate file syncing into the storage cloud powered by FolderShare, which they acquired back in 2005, stepping on the toes of quite a few startups along the way.

Update: I’ve been able to join the Folders beta at folders.live.com with no restrictions. 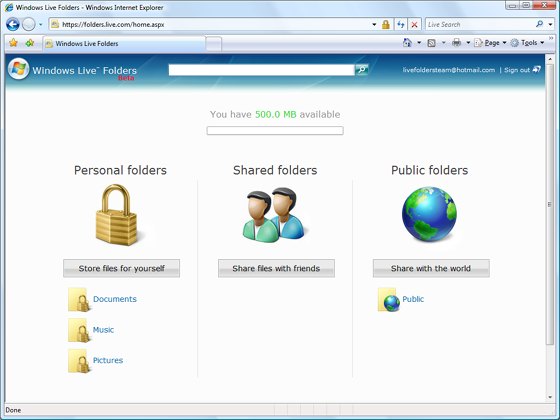