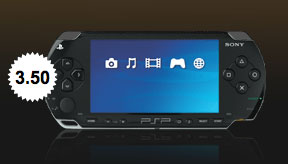 Many of us were under the impression that the PSP’s firmware upgrade to 3.5 only allowed remote access to PS3s, but there was some speculation going around that it had also unleashed the CPU’s full potential. Rumors are fun and all, but hard facts make everyone feel warm and fuzzy.

Sony has now officially confirmed that the firmware upgrade, has indeed, unleashed the full potential of the processor to 333 MHz. But you wouldn’t know it because current games only ran at 266 MHz. The upgrade does allow developers to begin coding for the faster processer speeds, so future games will surely be a much better looking and smoother than they are now. A negative from this upgrade could be the degradation of battery life, but without games running at top speed it’s hard to say if this is true.